The red imported fire ant (Solenopsis invicta) is an aggressive, invasive ant species that have become widespread across the southern United States. They are native to South America, and were unintentionally introduced into North America from central Brazil in 1933, by hitchhiking on board a cargo ship.

Fire ants are known for their extensive mounds, which they can build in a range of soil types, reaching up to 18 inches in height and 2 feet in width. Each mount is often equipped with multiple tunnels that extend 5 to 6 feet under the ground surface. Often, if rotting logs or stumps are present, fire ants will incorporate these structures into the design of the mound. They have also been known to frequently develop mounds in or under buildings. Fire ants favor building their mounds in open sunny areas, such as pastures and urban yards, making them frequently found near chicken coops.

Fire ants can be a serious hazard for chickens, especially for young chicks and small bantam breeds. If chickens accidentally disturb the fire ant mounds, swarms of aggressive ants quickly arise and respond by repeatedly stinging and biting the bird. They will inject an alkaloid-containing venom that causes great pain, localized necrosis and swelling. The size and health of the bird influences the severity of the trauma. In some cases it will kill the bird, depending on its size and the number of ants attacking. The birds that may survive the initial attack often develop secondary infections related to the localized necrotic areas caused by the ants' stings and bites.

Swelling
Localized lesions or necrosis
Ants visible or mound nearby 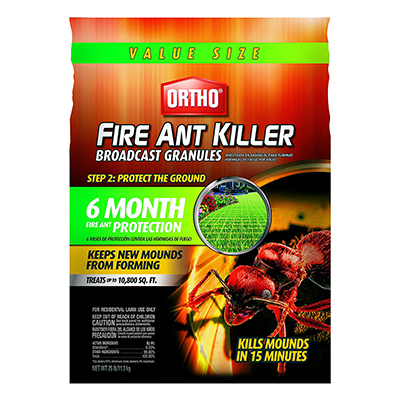