Tabitha is a 4-year-old Ameraucana hen from a backyard flock who had a history of reoccurring ascites, presumably due to egg yolk peritonitis (EYP). Tabitha would do well after the fluid was drained, but it would always come back, despite treatment with antibiotics, anti-inflammatories, and furosemide.

Tabitha’s owners decided they wanted some answers, so they brought Tabitha to see Dr. Rebecca Gounaris at the Pleasantville Animal Hospital of Fallston, in Fallston, Maryland.

Dr. Gounaris suspected that Tabitha’s ascites was most likely tumor related. Unfortunately, reproductive tumors are very common in domestic laying hens. Up to 30 to 35% of domestic hens develop ovarian cancer by the time they are 2.5 years of age (Frederick, 1987).

Dr. Gounaris proposed proceeding with an exploratory surgery with Tabitha. It would simultaneously provide both a definite diagnosis and treatment. Dr. Gounaris could get rid of all the fluid present as well as remove any abnormal structures (such as tumors, cysts, accumulated egg debris) if possible. Although there is always a risk associated with putting a bird under anesthesia, Dr. Gounaris had done numerous exploratory surgeries on chickens in the past, and never lost a bird on the table.

Dr. Gounaris proceeded with the exploratory surgery on Tabitha. She suctioned off nearly 600mL of ascites fluid from Tabitha’s body, which was an astounding amount given her small size (less than 3.5 pounds).

Unfortunately, during the surgery, Dr. Gounaris discovered a very large tumor in Tabitha’s left ovary--- an ovarian adenocarcinoma. Tabitha had ovarian cancer. The tumor was well advanced, and due to its vascular nature, it wasn’t possible for the tumor to be removed safely.


Dr. Gounaris closed Tabitha back up, and delivered the bad news to Tabitha’s owners. Tabitha went home to spend the remainder of her time with her owners and chicken friends. Since Tabitha’s cancer was so advanced, there wasn’t much more that could be done other than palliative care. Sadly, Tabitha passed away about a week later.

Tabitha’s owner asked Dr. Gounaris if she’d perform a necropsy on Tabitha, so they could get a better understanding of the tumor for educational purposes. Tabitha’s ovary was almost unrecognizable to that of a normal ovary in an actively laying hen. 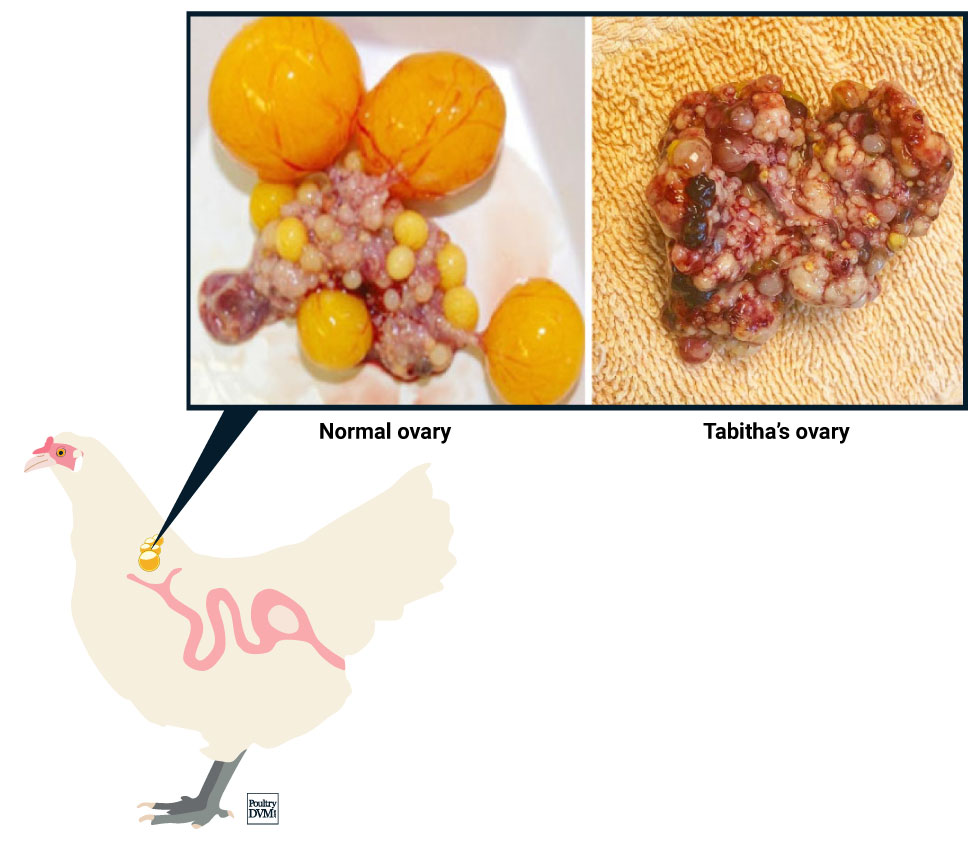 Comparison of Tabitha's ovary to a normal laying hen's ovary.

A normal hen’s ovary consists of a hierarchy of follicles in all stages of development. These appear as various sizes of yellow, yolk-filled ovals. In Tabitha, these follicles were replaced by multiple white nodules, many of which had coalesced to form a cauliflower-like appearance. The necropsy also revealed that Tabitha's digestive tract had tightly adhered to itself and had adhesions on the outside. 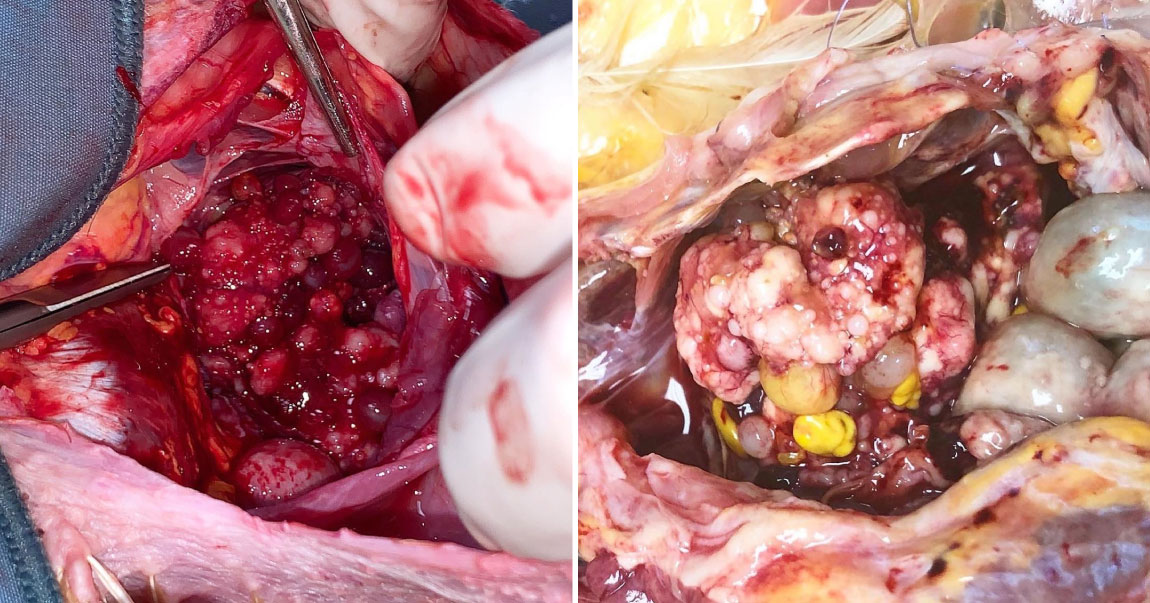 When chickens have chronic internal fluid accumulation, it causes a lot of inflammation, which is damaging to other organs. Dr. Gounaris suspected that the ovarian tumor was what caused the chronic fluid accumulation (ascites) in Tabitha's belly, which damaged the digestive tract and caused her body to ultimately shut down.

The Value of Exploratory Surgery

Exploratory surgery is of great value in cases of birds with suspected reproductive issues. It serves as both a diagnostic tool and method of treatment. For chickens with oviduct impactions, hernias, cysts, and certain tumors, surgical removal is the only possible treatment.

Diagnostic imaging such as radiographs (xrays) and ultrasound can provide valuable information, however, each has its limitations, and neither provide a means of treatment. Laboratory tests can also be useful, but they can also get costly and unless your veterinarian has an in-house lab (with blood analysis tools designed specifically for birds), it will take a couple days for the results.

For pet chicken owners with hens, finding a veterinarian with experience and success in exploratory surgeries in chickens is essential.

This story is dedicated to the memory of Tabitha, who was a very special hen with wonderful owners who truly cared and did all they could to try to save her life. It is with great hope that her story can help educate other owners, as unfortunately chickens are very prone to reproductive disease and cancer since they are so good at laying eggs. You were loved and are so missed, Tabitha.


About Pleasantville Animal Hospital of Fallston

Pleasantville Animal Hospital of Fallston, located in Fallston, Maryland, is a family-owned, full-service hospital that provides veterinary services for dogs, cats and birds. Their expertise in the field now spans over three family generations, and they are very proud of this unique heritage. The hospital has an in-house laboratory, allowing for rapid diagnostic testing for critical care patients, digital radiography (xrays), surgical suite, and an on-site pharmacy. Dr. Scott Gounaris has been practicing veterinary medicine for 35 years and founded Pleasantville Animal Hospital in 2002. His daughter, Dr. Rebecca Gounaris, now works alongside him, and they approach each case as a team.

Dr. Rebecca L. Gounaris is a 2016 graduate of the Virginia-Maryland College of Veterinary Medicine and is Dr. Scott Gounaris's oldest child. In addition to her lifetime love for cats and dogs, she has a deep passion for birds and participated in externships at several exotic veterinary clinics during her senior year. She has also worked for many years at Tri-State Bird Rescue & Research in Newark, DE, starting while she was earning her undergraduate degree at University of Delaware, and continues to provide veterinary care there to wild birds in need. After spending much time away from home for her education, she is thrilled to be practicing medicine back in her hometown and alongside her family members. She is a member of the Avian Association of Veterinarians, American Veterinary Medical Association, and Maryland Veterinary Medical Association. She also competes in synchronized ice skating and has two cats, Arwen and Pippin, a Sun Conure, Nino, and a Green-cheek Conure, Dutch.

Dr. Scott Gounaris graduated from the University of Florida Veterinary School in 1982. His lifetime love for animals drove him to choose veterinary medicine as he wanted to help animals that could not help themselves. Dr. Scott Gounaris enjoys the teamwork that we and the pet owners employ to work together for the welfare of their pets. The greatest reward for him is a positive outcome for his patient and their owners. With over 40 years of experience in the veterinary field, Dr. Scott Gounaris has seen it all. Prior to opening Pleasantville Animal Hospital of Fallston, he worked for his father, who was also a veterinarian. Now the father of a recent veterinary school graduate, a current veterinary school student, and a college undergraduate, he has shared his love of the profession with the next generation of Gounaris doctors.