Baylisascariasis is a zoonotic infection caused by larvae of raccoon roundworm, Baylisascaris procyonis (found in raccoons and dogs), and sometimes B. columnaris (found in skunks), and B. melis (found in badgers).

In raccoons, adult worms live in the small intestine. When eggs laid by the female worms are passed in feces and reach the ground, under ideal conditions of humidity and temperature it takes a minimum of about 2 weeks for the first-stage larvae to form. Female worms can produce between 115,000 and 179,000 eggs per day per worm; therefore, infected raccoons can shed millions of eggs per day in their feces. Even after the feces has dissolved, the roundworm eggs will remain viable in the environment for several years, even when exposed to freezing temperatures.

Chickens become infected by accidental ingestion of embryonated eggs that are present in the environment, shed from the feces of raccoons, dogs, and other carriers. Once the eggs are eaten, larvae are released, which penetrate the intestinal wall and migrate through the bloodstream to reach other organs and tissues, including the Central nervous system (CNS) and eyes. 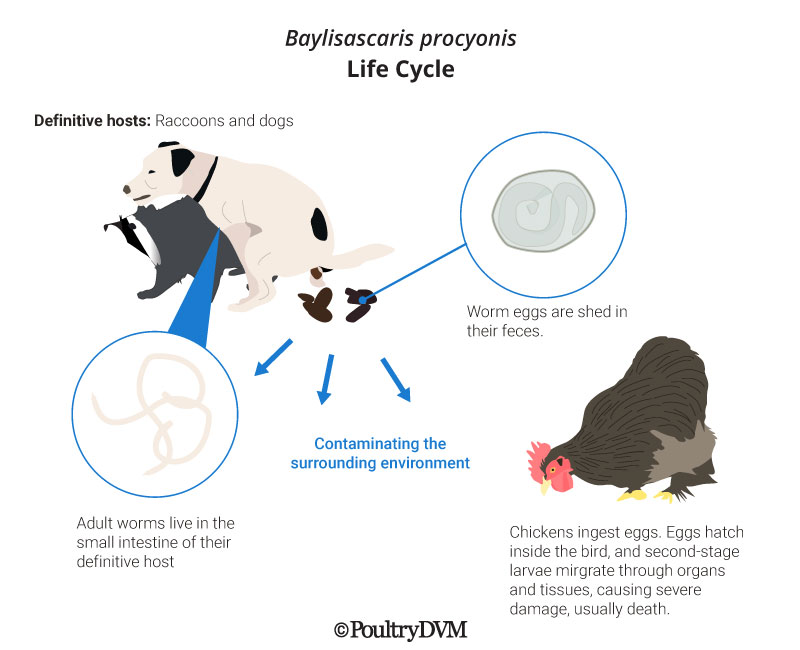 They then settle and become encapsulated in granulomas in various organs and tissues, resulting in sudden onset of neurological signs such as head tilt, and paralysis.