"Kindness is a language which the deaf can hear and the blind can see." - Mark Twain

Mochi is a three-year-old Light Brahma hen who developed cataracts in both of her eyes when she was around six months of age---causing her to lose her eyesight. Laura Pedersen purchased Mochi, and her sister Dottie, as young chicks from a local Feed and Grain store in Concord, CA in February 2014. Of the two, Mochi was the only one who was affected by the cataracts. There are different reasons chickens can develop cataracts, however being a Light Brahma, she was actually more at risk of developing cataracts. In 1991, one study revealed that 69% of the cockerels and 15% of the pullets in an inbred flock of approximately 200 dark and light Brahma chickens had cataracts in one or both of their eyes, and crooked toes; the chickens had been normal until all of a sudden at six months of age they developed cataracts, with or without crooked toes. 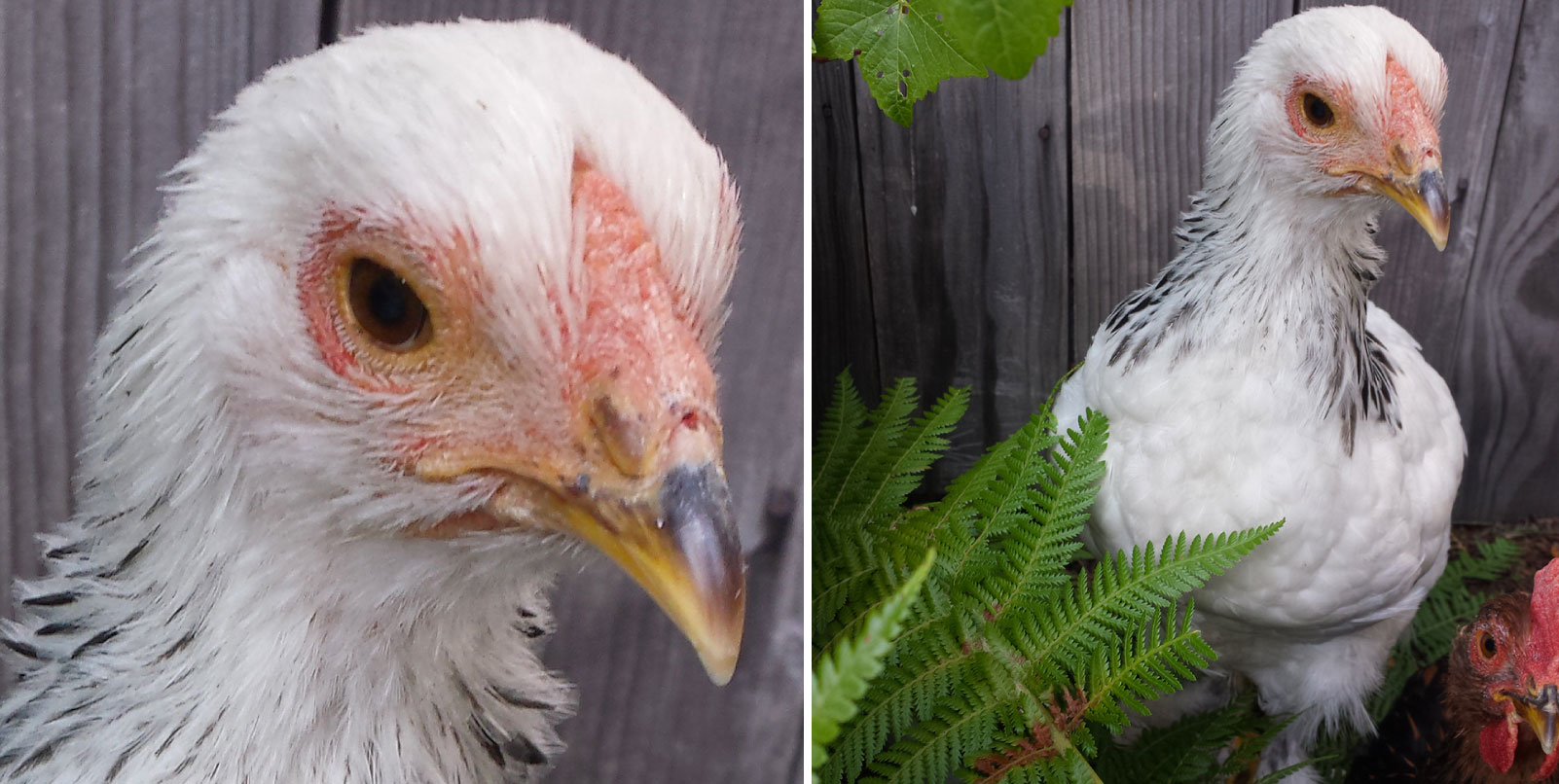 Mochi before Cataracts
Laura first realized that there was a problem with Mochi late one afternoon in August 2016. Mochi was foraging for bugs and bits of grass while free ranging in the backyard. However, something was off about her---she kept periodically bumping into objects. In order to get a closer look, Laura offered the hens’ treats in her hand---as she normally would do. Usually, all of the hens would get at least one treat each, however this time was different---Mochi wasn’t fast enough to get even a single treat. Upon closer inspection of Mochi, Laura realized that there was a visible whiteness—or in other words, clouding of both of Mochi’s eyes. It was so strange, because Mochi had seemed fine the day before---it was almost as if the cataracts developed overnight.

Mochi Post Cataracts
Although Laura suspected that the problem was cataracts, she didn’t know for sure, and regardless, she wanted to make sure that the hen was otherwise in good health—so she made an appointment for Mochi with the Montclair Veterinary Hospital. Upon arrival at the veterinary hospital, Dr. Cynthia Lynn asked Laura questions about the hen’s history, and performed a physical exam on her body. Other than the cataracts---which Dr. Lynn confirmed Mochi did indeed have in both eyes---she was otherwise in excellent health. Laura took the opportunity to ask the vet some advice about how best to care for a blind chicken. The Dr. Lynn explained how two of the most important things were to monitor Mochi to make sure that she was getting enough food and water, and to ensure that she made it back to her coop every evening—for she would be easy prey for a predator.

Care & Support For A Flock Member That Becomes Blind

Similar to humans, blind chickens use their hearing differently and ascribe meaning to sounds that chickens that aren’t blind might not care about. This same concept also applies to memory---a blind chicken will use their memory differently than a “sighted” chicken (a chicken that isn’t blind). An example of this concept was demonstrated by Mochi and her “sighted” flock mates. Whenever the hens are in an open space together, the “sighted” chickens regularly make small noises to let Mochi know that they were nearby----they were talking to one another. Whenever the “sighted” hens wander a bit too far away, Mochi makes an “anxious” vocalization. Since whenever the girls free range, they have their human out there with them, whenever one of them hears Mochi’s “anxious” cry—they pick her up and move her closer to the other hens.

Something to emphasize is that a chicken that is born blind or vision impaired, is going to require slightly different management changes and care as opposed to a bird that was born with their full vision, but lost it later in life. Chickens that become blind may require a little more effort to help teach them orientation and mobility, through applying consistency and routine.

Some specific things to consider for caring for a blind hen, that Laura realized during her experience with Mochi’s cataracts include: