Henna was found outside and alone on a rural farm in Battle Creek, Michigan. At the time, she was living in a large, dilapidated wooden barn with no insulation or heat source. The door to the barn was kept open, allowing for cold air drafts to continuously blow inside. No food was provided and all water sources were frozen solid. At the time, the temperatures were just below 32 °F (0 °C) during the daytime and dipping into the single digits at night.

Although there was once an entire flock of chickens living at this location, Henna was the only remaining survivor. Teri, a volunteer from All Species Kinship (A.S.K.) spotted the hen while providing animal care assistance to other farm animals on the property. Since there was no food provided, this forced Henna to have to venture into the snow drifts to search for a source of food. Henna was discovered literally frozen into a snow bank just outside the barn, presumably she had been like that for at least 48 hours.

Teri swiftly came to Henna’s rescue, carefully removing her from the snowbank and promptly brought her to their veterinarian, who is a board-certified avian specialist. 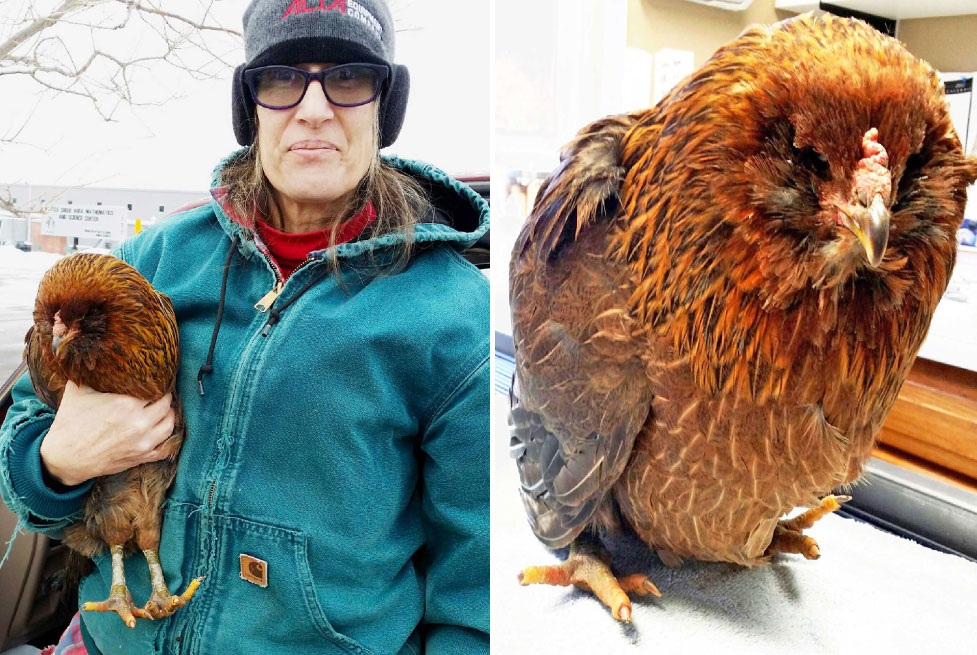 Teri and Henna (left photo), and Henna’s initial condition at her vet exam. Note how she couldn’t bend her feet (right photo)

Henna’s legs were discolored and so stiff that she was unable to use them at all. The top of her feet were swollen and covered in blisters, the bottom had blackened areas indicating the beginning effects of frostbite. 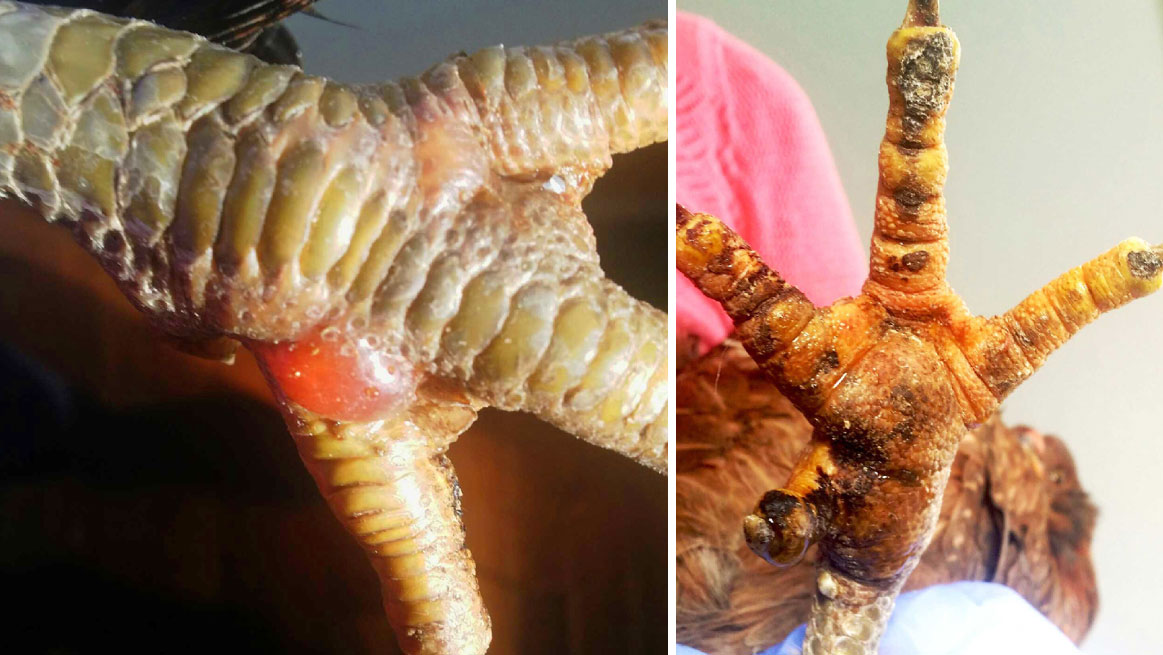 If any attempts were made to bend her legs, they would have quite literally snapped in half. In addition to the frostbite, Henna was also emaciated with a prominent keel (due to starvation). She was barely conscious, severely dehydrated and weak.

Henna was placed in a temperature-controlled incubator, for support and most importantly to slowly warm her body back to normal temperature (which is what should be done with birds suspected to have any form of frostbite---from mild to severe). 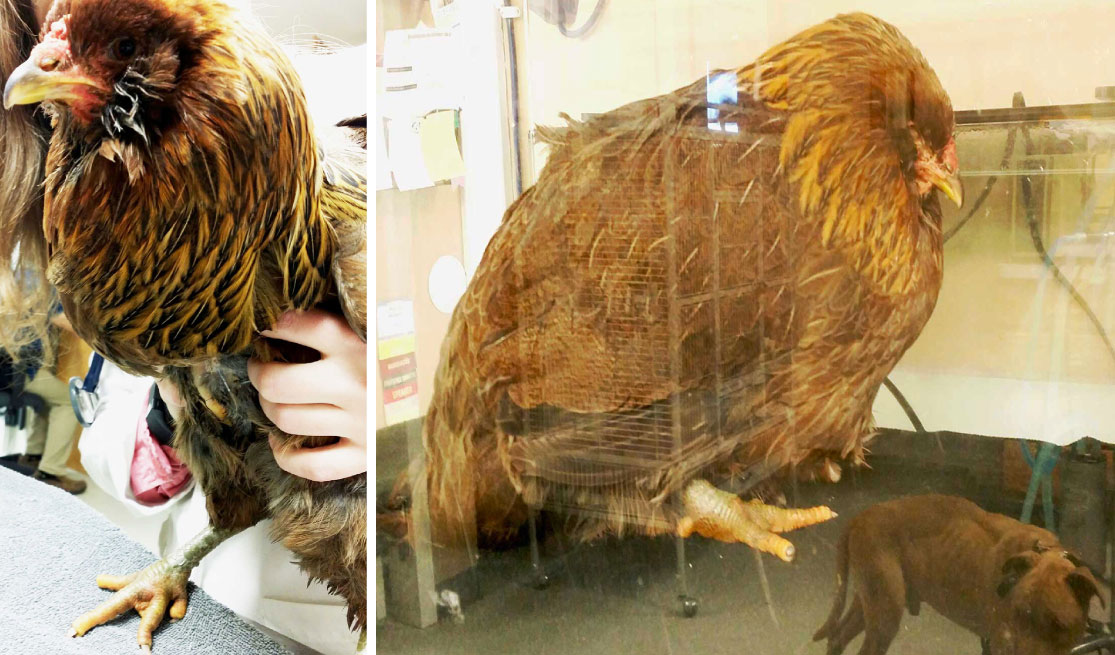 Henna’s prominent keel (left photo) and her in the incubator, with a starving dog in the background who had also been rescued by A.S.K. (right photo)

After Henna thawed in the incubator, she was administered fluids to improve hydration and tissue perfusion. 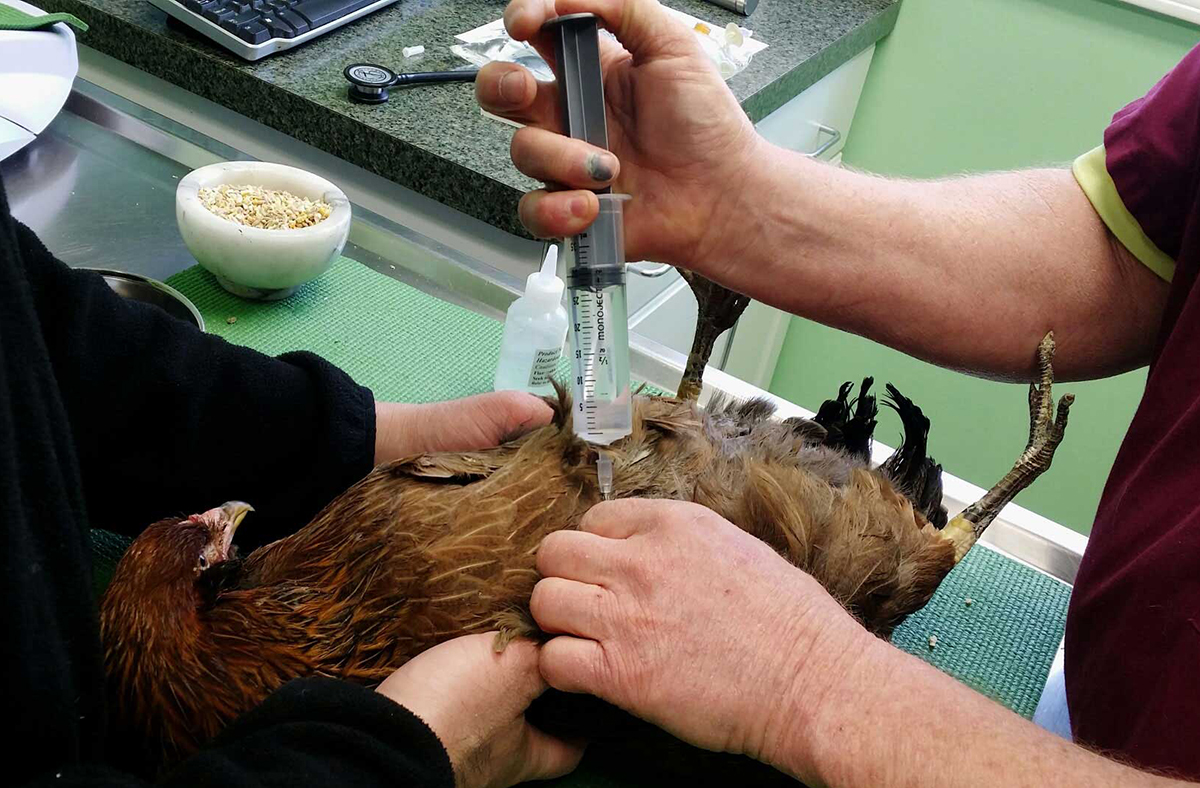 Once Henna’s condition had stabilized, she was released from the hospital to go back with A.S.K. Since A.S.K. is also a wildlife rehabilitation and triage clinic, they are specially equipped with veterinary equipment such as incubators, and have received special training and greatly experienced in caring for animals in critical condition. Otherwise, Henna would have remained hospitalized at the vet clinic since she was still in bad shape and unfortunately the worst wasn’t over.

Henna was prescribed pain medication and antibiotics to help manage secondary infections. Initially, she had to be gavage-fed since she was too weak to feed herself. She was kept inside the house, in a temperature-controlled incubator in-between feedings. To help keep her feet as clean as possible (which also helped reduce risk of secondary infection), Henna received daily Epsom salt baths where her feet were gently soaked.

Henna was kept under strict observation so that A.S.K could quickly address when, inevitably, her limbs started to fall off. Therefore, A.S.K. focused on keeping her as pain-free and comfortable as possible. Throughout the course of several weeks, Henna’s frostbitten legs and feet went through various stages of decline, while the cells and tissues began to decay.

How Henna’s feet and legs look after several weeks (the decayed, blackened tissue).

This is because when chickens are exposed to cold temperatures, ice crystals can form inside their tissues, and gradually die off, leading to gangrene (which is when the tissue blackens and shrivels) and loss of the affected body parts. Henna could barely stand and had almost no use of her legs or feet at all. 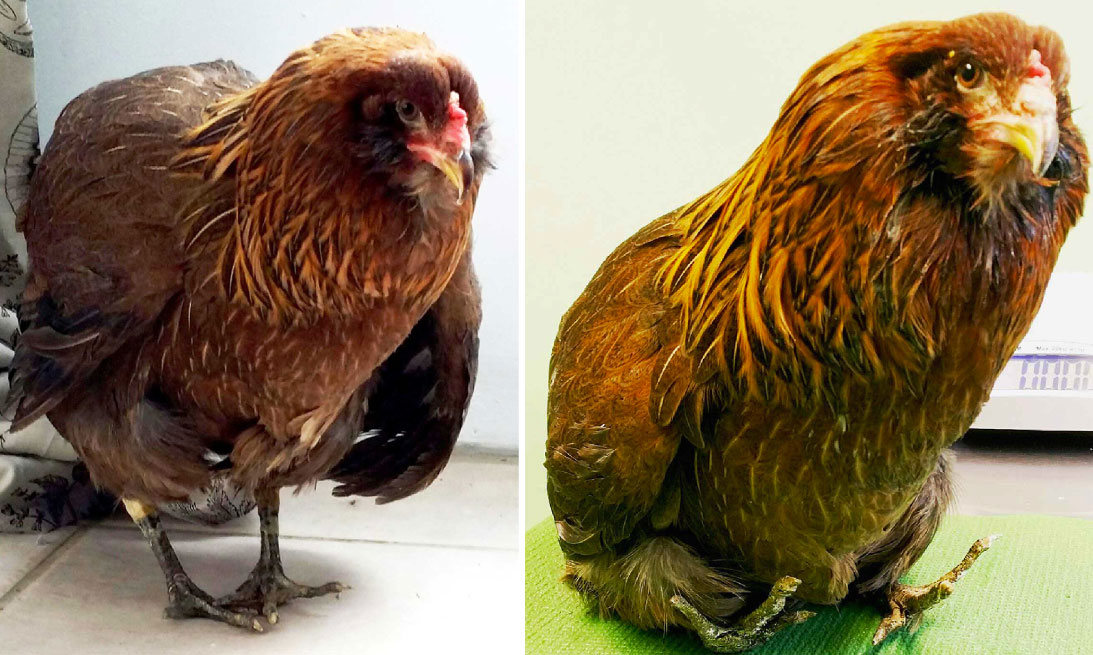 Henna as she tries to stand on her “dead” decayed legs.

A.S.K. was trying to prepare for the inevitable outcome—that eventually Henna’s legs would fall off. Her legs couldn’t be surgically amputated because it was impossible to determine how far up the frostbite would go. Then one day it happened. 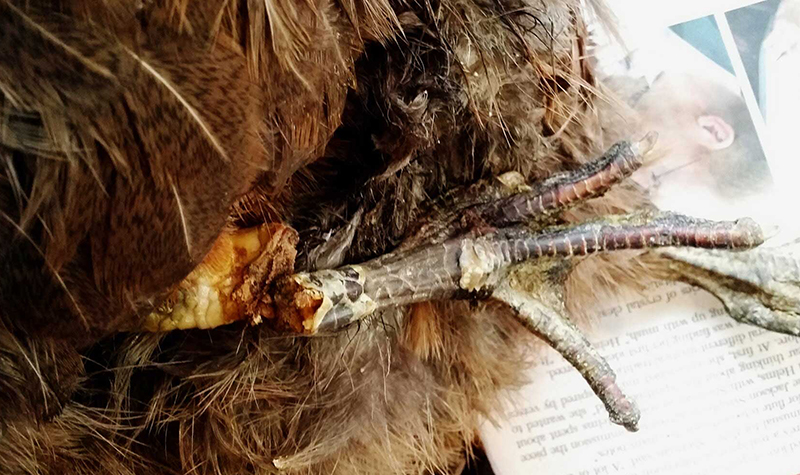 Henna screaming as her leg falls off her body.

A.S.K. were not prepared for how upsetting it would be to hear the guttural cries that came from the little frostbitten hen when the first of her legs fell off. Henna screamed in both pain and extreme shock when her leg snapped off, despite all the pain medication she was on. A.S.K. wrapped her in their arms and tried to offer her as much comfort as possible during her horrific experience. 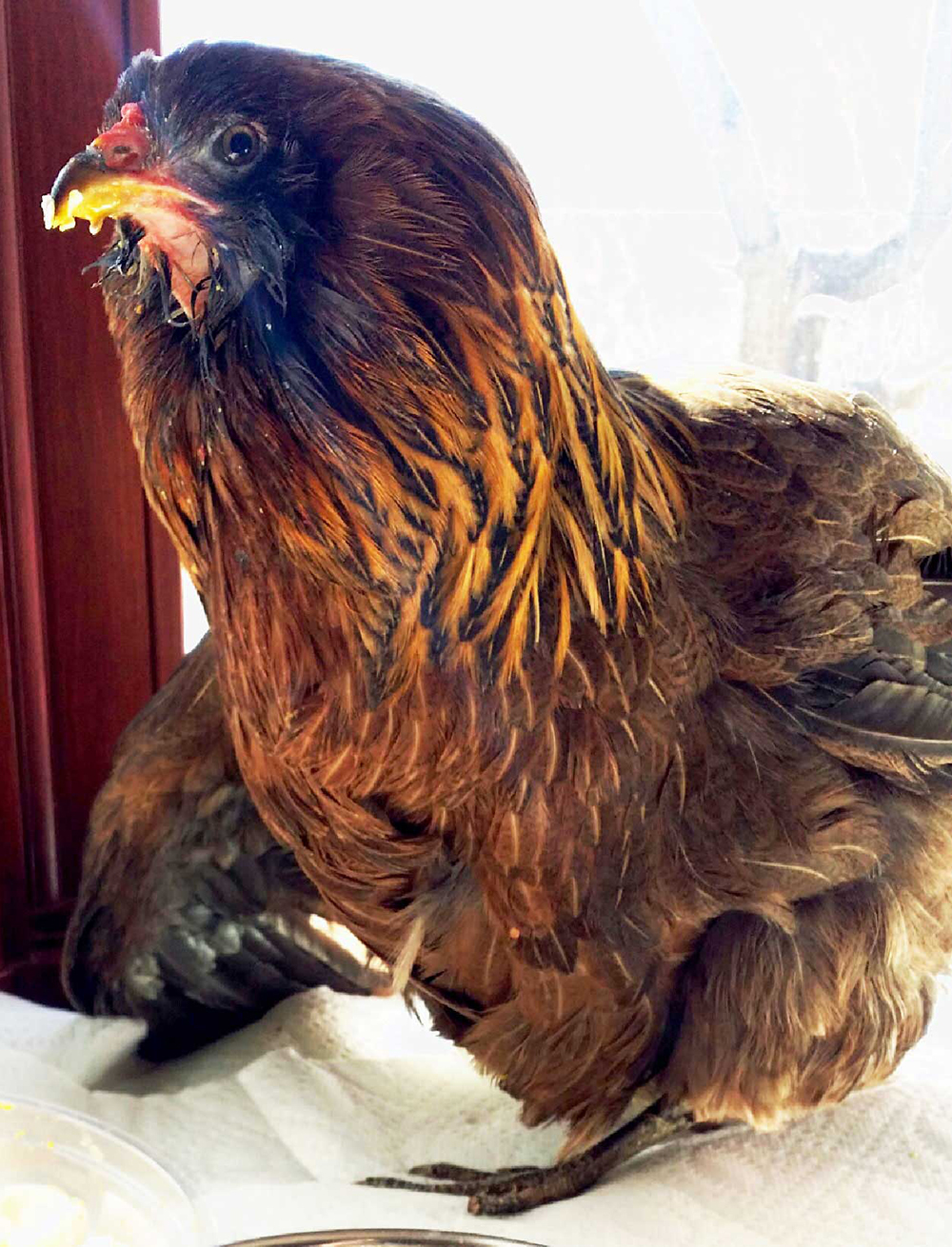 “Even though she was maintained on pain medication, even their effects could not soothe her shock. Her response was no different from a humans’, a dogs’ or a cats’–it was horror to suddenly be immobile. Yet days later, Henna was re-learning to walk, albeit differently abled, she still had a will to survive and a life to live.” said Sophia DiPietro, A.S.K.’s Executive Director and cofounder.

Henna as she attempts to stand on her other, frostbitten leg.

Although Henna has since lost both of her legs, and is permanently disabled, she still enjoys a good quality of life and is happy to have been given the opportunity to live her life. 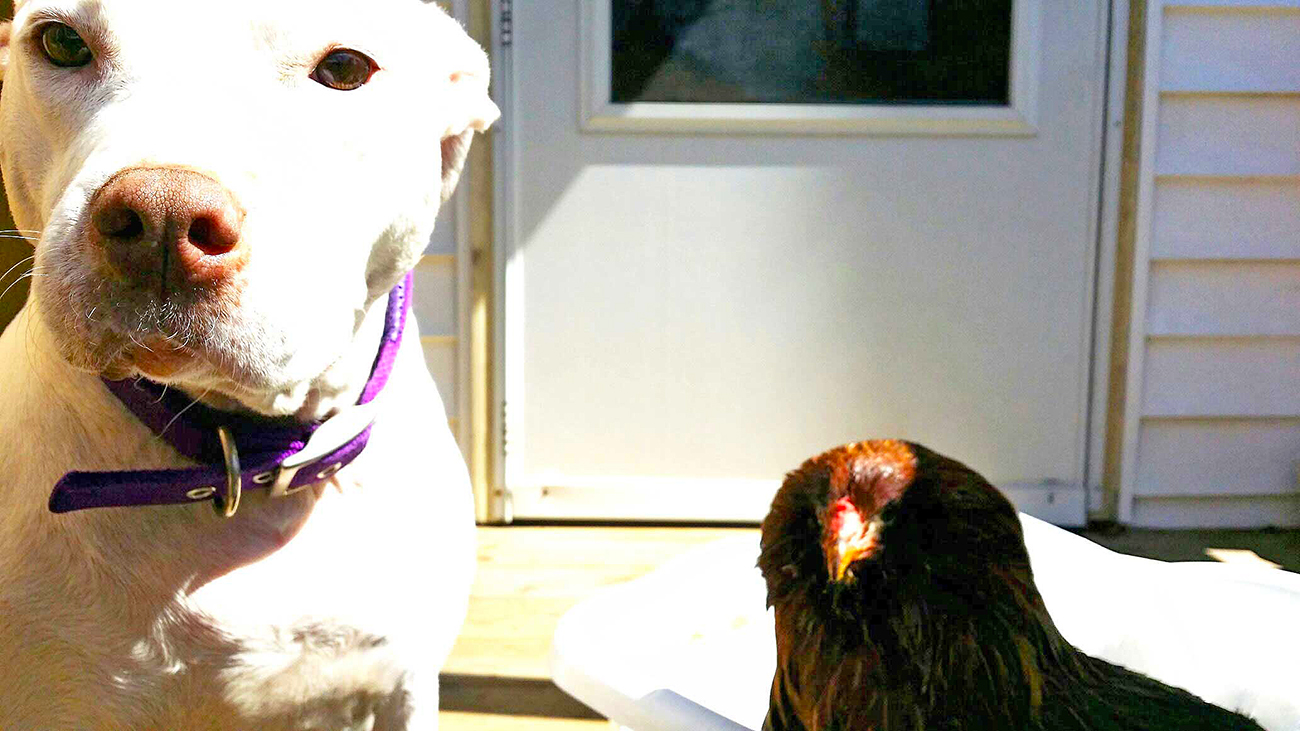 Henna may be differently-abled, but she still enjoys a great quality of life.

Henna ended up becoming good friends with Persia the dog, another rescue survivor at A.S.K. 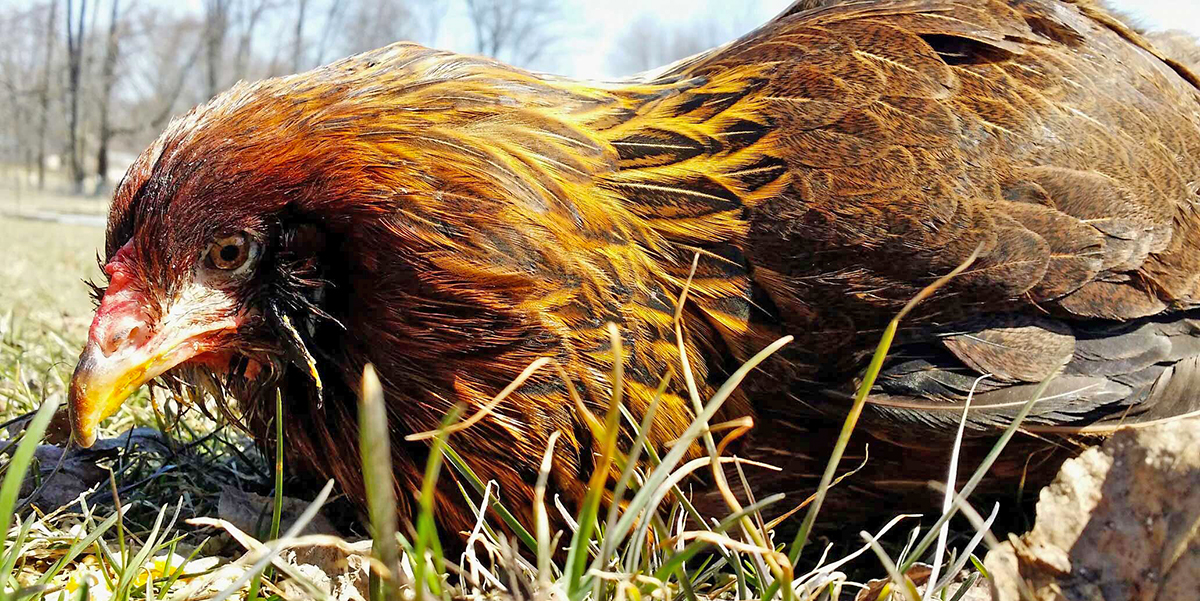 Henna helps A.S.K. raise awareness about the seriousness of frostbite and to help prevent other chickens from being victims of human neglect. 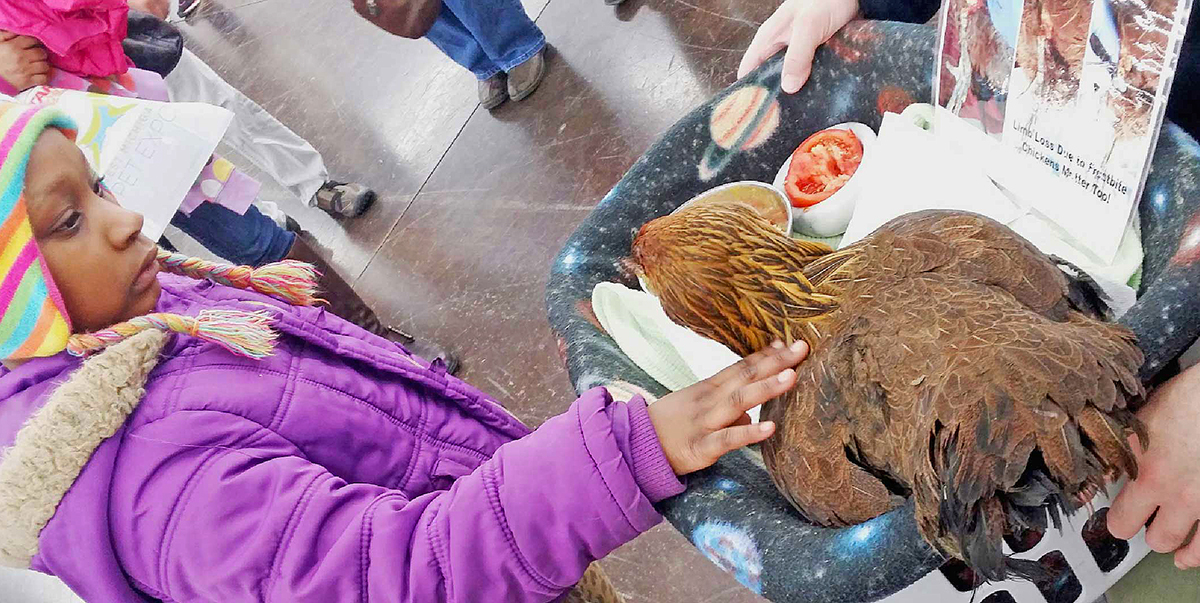 Chickens are just as vulnerable to frostbite as any other living creature would be. The risk of frostbite is directly dependent on the ambient temperature (also taking into account the wind chill) and length of exposure. When it’s cold AND windy, it takes less time for frostbite to occur.

This is because frostbite develops when ice crystals form in cells and tissues---which can occur anywhere, but the most susceptible areas are the parts of their body that are furthest from their hearts---the legs and feet, comb and wattles. When temperatures dip below 40°F, a chicken's body become stressed. When the 'real feel' temperature dips below 32°F (which combines outdoor temperature + wind chill factor), chickens are at risk of frostbite. No matter what breed they are.

About All Species Kinship

All Species Kinship (A.S.K.) is a 501 (c) 3 nonprofit animal rescue and sanctuary located in Battle Creek, Michigan. They have been saving abandoned and abused animals from the neighborhoods of Calhoun County since 2001. All they had to do was drive down the Main Street to find dogs sitting hopelessly on the ends of chains attached to rickety wooden doghouses without even the basic comforts of straw insulation in the middle of winter. There they sat, as permanent lawn ornaments. These were dogs of underserved neighborhoods; animals were just an ill-fated extension to multiple struggles faced by their humans, and historically no attention was given to them by anyone. They were disregarded, overlooked and labeled as “fighting” dogs sitting on guard at “drug houses” “owned” by “unteachable” people. All Species Kinship (A.S.K.) set out to break stereotypes and change lives. Since then, A.S.K has expanded to also saving farm animals and wildlife throughout the state of Michigan.