Heihei The Rooster’s Case Of Glaucoma

Heihei is an older Australorp rooster who was recently available for adoption from the Rancho Cucamonga Animal Care and Adoption Center, in Rancho Cucamonga, California. The Australorp Breed is known for their beauty, friendly and docile personality, black glossy feathers, and big black soulful eyes---or eye in Heihei’s case. For you see, Heihei had one of his eye's removed due to glaucoma, and is going blind in the other from cataracts.

Handsome Heihei
Heihei is one of hundreds of domestic chickens sitting in animal shelters across the United States (not including the adoptable birds at animal sanctuaries, or the ones dumped and not picked up by animal control). Due to the increasing popularity of backyard chickens, especially in urban areas, this number is steadily growing. Approximately 97% of these birds are roosters---like Heihei.

One early September afternoon in a quiet residential neighborhood in southern California, a kind couple spotted a black rooster wandering about in their yard—this was Heihei! They weren’t sure where he came from, since the area was made up mostly of townhomes, where chickens weren’t allowed. Between the two of them, they managed to catch the rooster. Since they did not own a cage, they temporarily housed the rooster in a large empty fish tank, until an animal control officer could respond and pick him up.

While waiting, the gentleman (in the couple) noticed Heihei’s left eye was bulging, and appeared swollen. Shortly after receiving the call, the couple heard a knock at the door---it was Officer Rivera from Rancho Cucamonga Animal Care, coming to collect Heihei. At this time, the gentleman also pointed out Heihei’s bulging eye to Officer Rivera.

Heihei in his temporary fish tank
Officer Rivera returned to the Rancho Cucamonga Animal Care with Heihei, where she immediately brought him to see the shelter veterinarian, Dr. Impett, so she could address his swollen eye. Heihei was diagnosed with glaucoma.

Glaucoma doesn’t just affect humans---it affects all animals, including chickens. It is actually a group of eye conditions which occur when fluid builds up in the front part of the eye. This fluid exerts increased pressure within the eye, causing it to become enlarged and painful, leading to optic nerve damage.

Chickens can develop glaucoma as a primary condition or secondary to trauma. If caught early, there are some treatment options available. However, unfortunately in Heihei’s case, his condition was already in the advanced stages. Dr. Impett recommended surgery to remove the eye. Since Heihei was already stressed from the change in environment, the doctor thought it would be best to wait a week, to give him time to adjust.

A week later, Heihei had enucleation (eye removal) surgery, while under general anesthesia. The surgery went smoothly and Dr. Impett was able to remove Heihei’s eye without any complications. Following the procedure, Heihei was given 0.04 mL of Bupronorphine (0.6 mg/mL) IM to help with the pain, and then twice a day for the next 3 days thereafter. 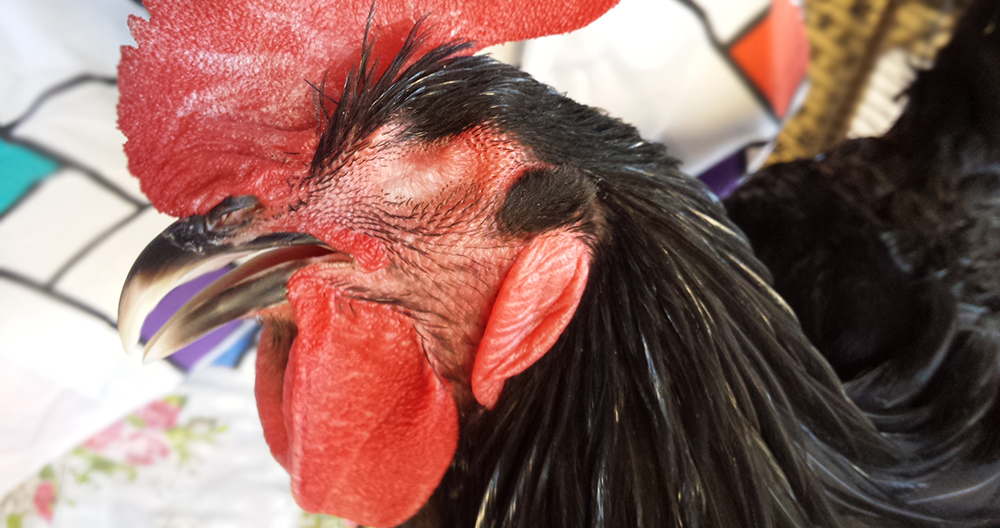 Heihei’s left eye, after recovery from his surgery
Throughout all the exams, surgical procedure, and his recovery, Heihei was a good boy about letting the staff at the adoption center handle him. Since the center has no other chickens besides Heihei available for adoption, the staff made sure to give him extra special attention. In order to keep an eye on him, the staff set up a temporary playpen for him to hang out in during the daytime. They placed the pen in an area less frequented by other animals---in their covered bay area directly across from the veterinary technician/treatment room. However, Heihei didn’t seem to mind the dogs walking past him, and was actually slightly curious.

Heihei in his special daytime playpen

Heihei seemed to be recovering great, until recently, the staff noticed a change in his behavior. Suddenly Heihei became a little more easily startled when touched. He would also tilt his head whenever someone walked by or spoke near him. Upon closer inspection of Heihei’s right eye (his only eye), the staff noticed a change in its appearance---there was a blue cloud over the lens. Heihei was taken for an exam with the doctor, who confirmed that Heihei had developed a cataract in his right eye. This meant that Heihei would soon be completely blind.

Heihei has since been adopted out to a good home, with people who will love and care for him for the rest of his life. However, there are numerous other roosters sitting in shelters right now, waiting for someone to adopt them. Just check out Adopt a Bird Network to see for yourself. Most of these chickens, especially roosters, are not as lucky as Heihei--they may spend months to years sitting in shelters. Others are not even given that opportunity, for many animal shelters are not as wonderful as the Rancho Cucamonga Animal Care and Adoption Center were with Heihei.

In Rancho Cucamonga, zoning for chickens is very low residential and the property has to be minimum of a half-acre. Roosters are allowed as long as there is no noise disturbance complaints made by neighbors. There can be no more than 6 chickens per property.

Rancho Cucamonga Animal Care and Adoption Center, located in Rancho Cucamonga, CA, is an open admission municipal Animal Center which accepts and cares for nearly 5,800 animals a year. Their mission and goal is to build a community in which every adoptable pet finds a home. Some of their responsibilities include bringing pets and people together through pet adoptions, animal retention programs, community outreach as well as developing enrichment programs to keep their city’s homeless pets healthy and happy as they wait for their forever homes.