Chance is a rooster who was diagnosed with heart disease when he was only 3.5 months old. He is one of three baby roosters----Lucky, Fate, and Destiny—who were dumped at the close of a live animal auction in Enumclaw, Washington in April 2017. At the time, the birds were about 2-3 weeks old and in poor health. Shannon and Ryan from Sky’s The Limit Sanctuary (STLS) took them in and nursed them back to health. All four birds were covered in lice, infested with Cocci (confirmed through a fecal test), and upper respiratory infections.

Chance and his baby brothers dumped in a box at the close of a livestock auction (left photo) and baby chance recovering back at the Sanctuary (right photo)
Of the four birds, Chance was the biggest. At 3.5 months old, Chance weighed 7 lbs 2 oz. He initially started out only slightly larger than the other three birds, but quickly grew bigger in size at a much faster growth rate.

When outside foraging with the other birds, Shannon and Ryan noticed that Chance always had to rest more than the others (exercise intolerance), during which time he would appear to have trouble breathing (dyspnea). They soon realized that something was not right with Chance, and they decided to separate him from the others and bring him inside to live as a house chicken---in order for them to keep a more watchful eye on him.

Chance and his smaller-sized friends
In an attempt to slow his growth rate, they modified Chance’s diet. Instead of feeding him the typical ‘grower’ feed, Chance was switched over to a low fat formula diet. However, despite the change in diet, Chance was still having respiratory difficulty. His breathing became very heavy. At times, Shannon and Ryan could even hear Chance breathing from across the room. They realized it was time to take Chance to see the veterinarian.

Chance was taken to the All Creatures Animal Hospital in Bremerton, WA. Dr. Irene Choi greeted Shannon and Chance in the examination room. Shannon gave Dr. Choi a detailed explanation of Chance’s history, including a description about their concerns about his breathing difficulties and exercise intolerance. They also filled her in with the diet modifications they had made and changes in living arrangements since they first discovered he was having problems.

Dr. Choi gave Chance a physical exam which included listening to his heart---revealing the presence of a heart murmur. To gain a better understanding of what was going on with Chance’s heart, Dr. Choi took radiographs (xrays) of his body (thoracic view). The xrays showed that Chance had an enlarged heart that was surrounded by fluid (pericardial effusion). Pericardial effusion is a serious heart condition which can quickly lead to congestive heart failure, and sudden death. Heavier types of chicken breeds, such as Chance, have a high risk of developing cardiovascular disease, due to their high growth rate and size.

Dr. Choi recommended that Chance’s cardiovascular disease be treated initially with drug therapy (consisting of combination of an angiotensin-converting enzyme (ACE) inhibitor and a diuretic) and modification of his diet (which Shannon and Ryan had previously done just a few days prior to the appointment), which included:Once back at the sanctuary, over the course of the next two weeks, Shannon and Ryan noticed a pronounced change in Chance’s behavior. He wasn’t laying around as often as he had in the weeks prior to his vet visit. They noticed that they no longer could hear him breathing from across the room. The medication and/or diet modifications were indeed helping him feel much better.

Several months later, in September 2017, Chance was brought to see Board-certified avian specialist, Dr. James Onorati at Des Moines Veterinary Hospital. Dr. Onorati listened to Chance’s heart, and found that Chance no longer had a heart murmur! Radiographs were taken to assess whether there were any changes in the size of his heart or the amount of fluid that was previously surrounding it. Chance was also weighed—at only 5.5 months old, Chance weighed 9.5 lbs. 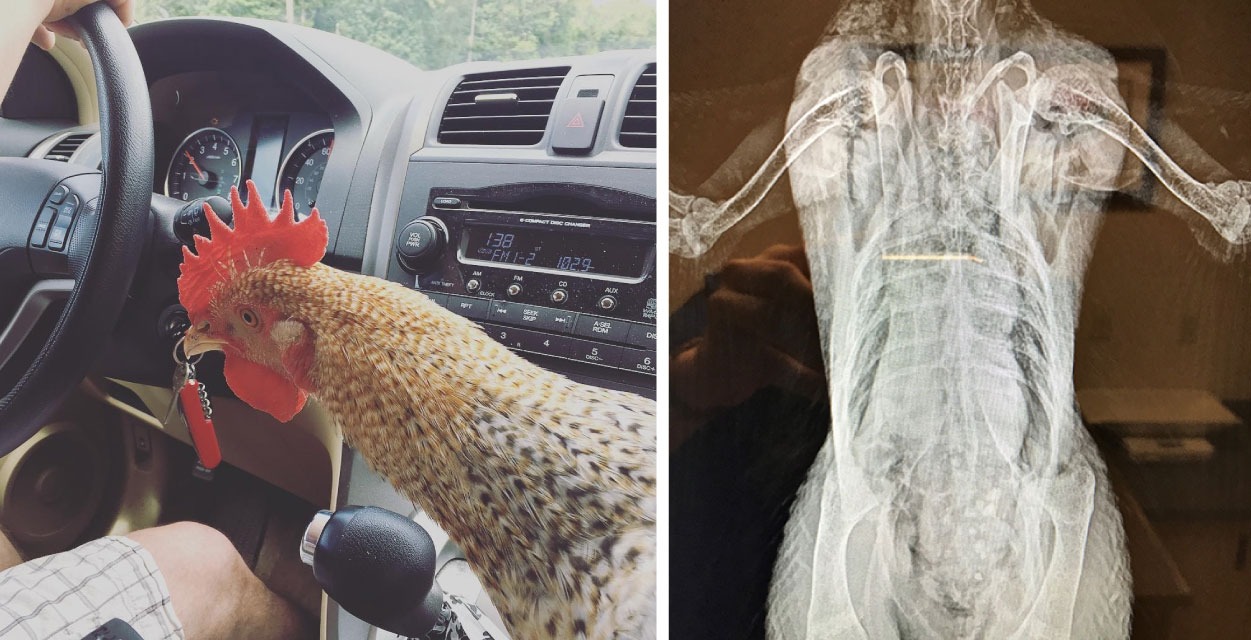 Chance on his way to the vet (left photo) and updated xrays (right photo)
Since Chance had grown since his last visit, Dr. Onorati adjusted Chance’s medication accordingly. He still receives the same dosage of Enalapril, however now he also takes .2cc of Furosemide (10 mg/ml) in liquid form, given by mouth twice daily. Dr. Onorati explained how he hoped to slowly wean Chance off of the Lasix and maybe eventually stop the Enalapril.

Chance jumping up on top of the cabinet (left photo) and living a happy life at Sky’s the Limit Sanctuary
Although Chance has a heart condition, through diet modifications (keeping him on a low energy feed), administering daily medication (diuretics and ace inhibitors to prevent heart failure), and regular veterinary exams, he is able to live a normal happy life at Sky’s the Limit Sanctuary.

About Sky’s The Limit Sanctuary

Sky’s The Limit Sanctuary is a small animal sanctuary located in Seattle, Washington who is dedicated to rescuing discarded and unwanted chickens. They first started rescuing hens in May 2015 after coming across an ad on Craig’s List about four unwanted Rhode Island Reds. The extremely poor condition the hens were in was very disheartening. The entire experience inspired Shannon and Ryan to try to help more chickens, and eventually, as they grow, other animals as well. Their motto is to ‘dream big or go home---the sky’s the limit’.

About All Creatures Animal Hospital

All Creatures Animal Hospital, located in Bremerton, Washington, is a full-service small animal hospital which first opened in 1992. The hospital provides preventative medicine, surgery, urgent care, and treatment of a wide range of small animal species such as dogs, cats, birds (exotic, chickens and ducks!), reptiles, and small pocket pets. They are fully-staffed with 5 Veterinarians, 11 licensed Veterinary Technicians, and support staff.