Boo is a 2.5 year-old Cornish cross rooster who lives indoors as a house chicken. He enjoys composing music on the piano, taking naps on the cat bed, playing with his cat friends, watching TV, and most of all, cuddling with his human mom, Mary Bowman. He is a valued member of the Bowman family, and is every bit as affectionate and loving as any dog or cat, if not more.

Life wasn’t always like this for Boo though. For the first six months of his life, Boo lived on a farm with lots of other chickens, where he was treated more as a commodity rather than as an individual. During this time, he was given continuous access to feed, which for a bird of his breed, is essentially a death sentence. This is because the Cornish breed, referred to as “broilers” by the commercial poultry industry, aren’t able to self-regulate their feed intake. They were bred this way purposely, so that they can grow to become “market weight” unnaturally fast and slaughtered for their body parts at six weeks old.

Mary learned about Boo from a post on the Facebook Group “Vegans with Chickens”, where someone had saw a Craigslist ad from a man who didn’t want his ‘mutant’-like ugly chicken anymore. Mary was familiar with the Cornish breed, as a few months earlier she had sadly lost her rooster, Julian, who she loved dearly. Boo looked just like him. Mary knew that she had to save Boo.

It was a four hour drive for Mary to reach Boo. When she got to him, he was so large, that he could barely move. At only six months of age, Boo weighed 15 lb (6.8 kg). His extreme obesity had also impacted his oxygen intake. His comb was purple (referred to as cyanosis) and he was breathing heavily. He was also terrified. Mary was scared that he would die during the car ride home. Thankfully, Boo was still alive when Mary pulled into the driveway at her home that evening.

Boo was initially very nervous and fearful of humans. It took him a few weeks before he decided that his new humans were okay people. However, Boo remained terrified of other chickens, even when in the presence of non-aggressive hens. This was because due to his mobility issues on the farm, it left Boo an easy target for bullying by the other chickens. It was very traumatizing for him. Therefore, the Bowmans’ decided that Boo would do best living indoors as a house chicken.

Besides the new living arrangements, and styling chicken diapers, Boo was also put on a healthier, more regulated diet. Instead of having unlimited access to feed, Boo received two meals a day. He got ¼ cup of Purina Layena pellets (soaked in water and served in a bowl) in the morning, and again in the evening. Throughout the day, Boo is given leaf vegetables to snack on.

Within about three months, Boo lost 5 lbs. His comb was no longer purple. He breathed normally, and felt much heathier and more active.

Roughly one year later, Mary noticed that the back of Boo’s comb was starting to turn purple again. He was also acting a bit lethargic and seemed to tire quicker than normal when he was active. She was worried something might be wrong, and made an appointment for Boo to see his veterinarian, Dr. Katherine Baine.

During the physical exam, when Dr. Baine listened to Boo’s heart, she noticed that Boo had developed an irregular arrhythmia. In order to get a better idea of what exactly was going on with Boo’s heart, Dr. Baine referred him to the University of Tennessee Veterinary Teaching Hospital for additional diagnostics.

One week later, Mary brought Boo to the University hospital. Upon arrival, the doctors collected Boo’s history and gave him a physical exam. Boo was well behaved as always and remained quiet, alert and responsive as the doctors collected his vitals. They noted the same irregular cardiac arrhythmia present as Dr. Baine had discovered during her exam a week ago, and proceeded with an echocardiogram and an electrocardiogram (ECG). It was discovered that Boo had an enlarged heart, and was diagnosed with dilated cardiomyopathy. He was also diagnosed with atrial fibrillation, which occurred as a secondary result of the enlargement.

Boo was given a poor long-term prognosis due to the progressiveness of the disease, but was given several medications to help control the clinical signs. Since there wasn’t much research conducted previously on control of heart conditions in pet birds, the doctors treated it as they would have in a dog or cat, realizing that the doses of the drugs will need to be adjusted.

Boo was prescribed several orally-administered medications:Several months later, Boo went back to the University for follow up testing to evaluate how his heart was doing. During this time, Boo had lost some weight (he was down to 9.44 lb (4.285 kg)). The echocardiogram showed that the heart contractility had improved, and the ECG revealed an improvement in his heart rate. However, to help it decrease the heart rate a bit more, an additional mid-day dose of diltiazem was added to his daily heart medications.

Some Obstacles Along the Way

One month later, Boo went back to the teaching hospital for a follow-up visit to check his heart. His weight had decreased a bit more, which was good. The echocardiogram revealed no changes since his last visit, also good. 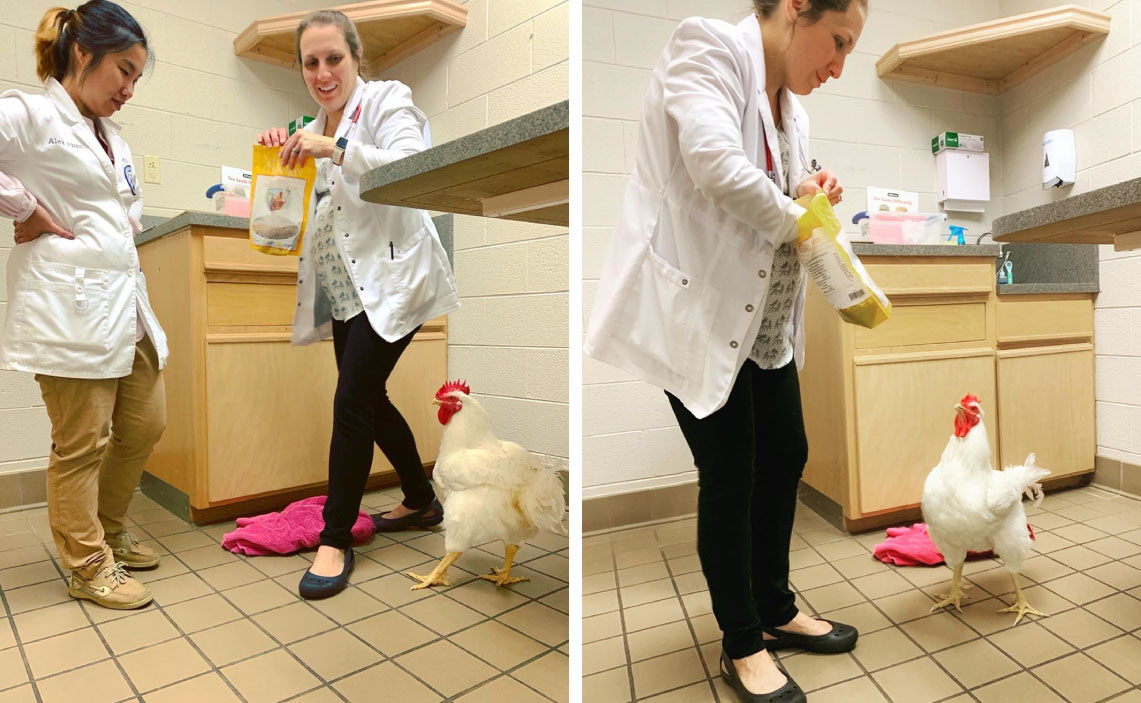 Thankfully, Boo’s medications have so far helped keep his heart condition under control. However, Boo’s experiences help demonstrate the importance of continuous monitoring and usefulness of these additional diagnostics to the veterinarians.

It has been over a year since Boo was first diagnosed with his heart condition, and he is still alive and showing continuous improvement. This is because of Mary. Hopefully her diligent efforts, unconditional love and kindness, and desire to help her pet rooster, will help serve as an inspiration to others. No matter how long Boo lives, he will live forever in the hearts of millions. An incredible little bird, with a big heart, who is every bit as amazing, intelligent, and affectionate as a dog or cat---and every bit as deserving of medical care.

About Boo the Roo 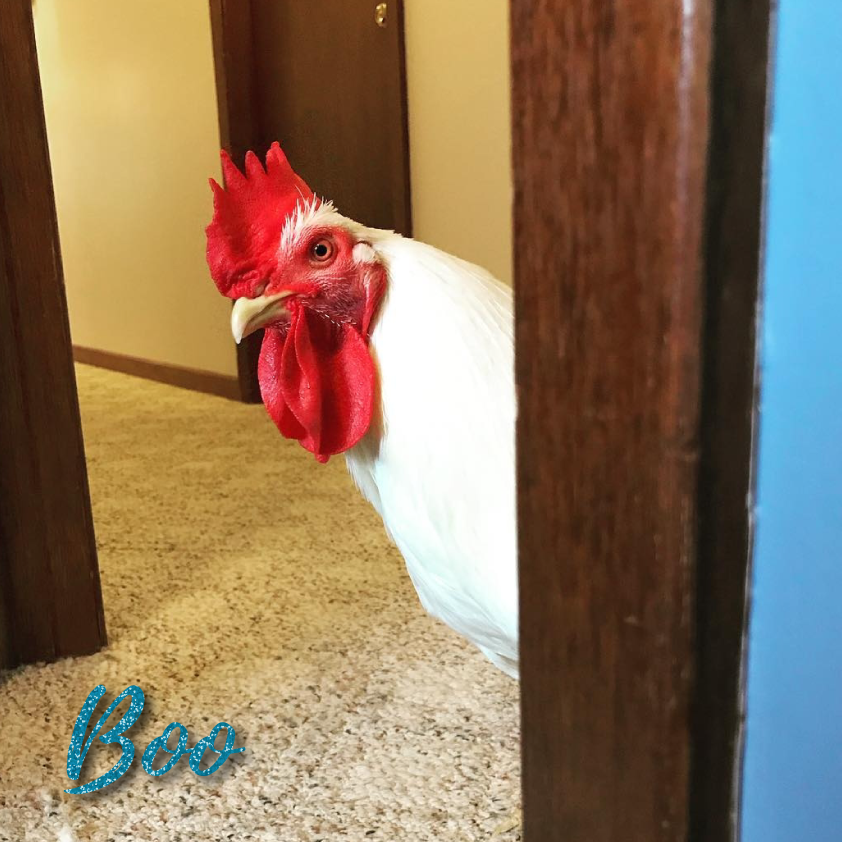 Village Veterinary Medical Center is a full-service companion animal veterinary hospital that has been serving the Knoxville community since 1981.

University of Tennessee Veterinary Hospital provides avian and exotic animal services through their Avian, Exotic Animal and Zoological Medicine department. They will treat pet birds and backyard poultry. Their vets are board certified by either the American Board of Veterinary Practitioners in Avian Medicine, Exotic Companion Mammal Medicine or the American College of Zoological Medicine.