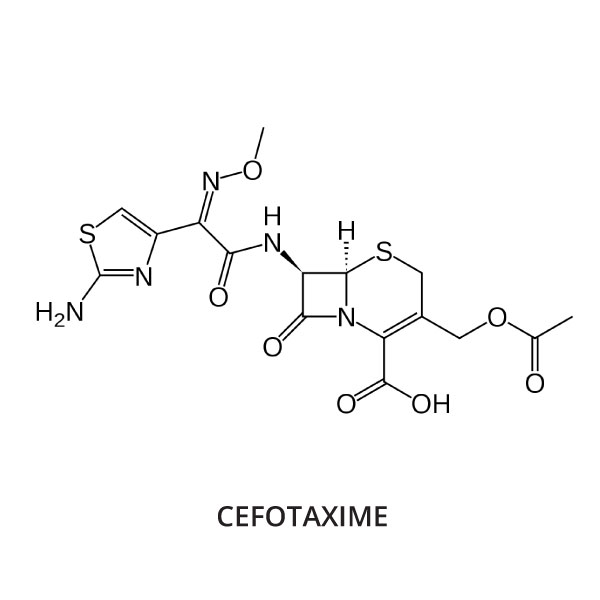 Cefotaxime is a broad-spectrum, third-generation cephalosporin antibiotic. It has good activity against highly resistant bacteria.

While less active against Staphylococcus spp. than the first generation agents, it still has significant activity against those and other Gram-positive cocci. Cefotaxime, like the other 3rd generation agents, has extended coverage of Gram-negative aerobes particularly in the family Enterobacteriaceae, including Klebsiella sp., E. coli, Salmonella, Serratia marcesans, Proteus sp., and Enterobacter sp.

Cefotaxime is most often used to treat birds with serious susceptible bacterial infections in the brain, but also useful for serious infections elsewhere in the body. Cefotaxime is not appreciably absorbed after oral administration and must be administered IM or IV to be effective.

Note: Cephalosporins have low toxicity, but may disturb the normal intestinal microflora of poultry, and should not be combined with diuretics.

Storage/Stability: Cefotaxime sodium sterile powder for injection should be stored at temperatures of less than 30°C; protect from light. Depending on storage conditions, the powder or solutions may darken which may indicate a loss in potency. Reconstituted solution is stable for 10 days refrigerated or 6 months frozen. It cannot be thawed and refrozen.