Spike is a one-year old Ameraucana hen who has a special condition known as crossbeak or scissors beak, which is a type of beak deformity. She lives with her humans, Sarah and Sonny Moy on their farm, which is located along the North Carolina coast. Spike is a very sweet, feisty little hen who does not let her disability stop her from being the life of the party! She is certainly no ordinary chicken---not only is she fiercely independent but she is quite determined to accomplish whatever she sets out to do. She is very much considered a fellow family member to her humans. She accompanies them to work every morning (they own a coffee shop in town), and even has her own special room set up for her in their office. Also, whenever the Moys go on vacation---so does Spike! 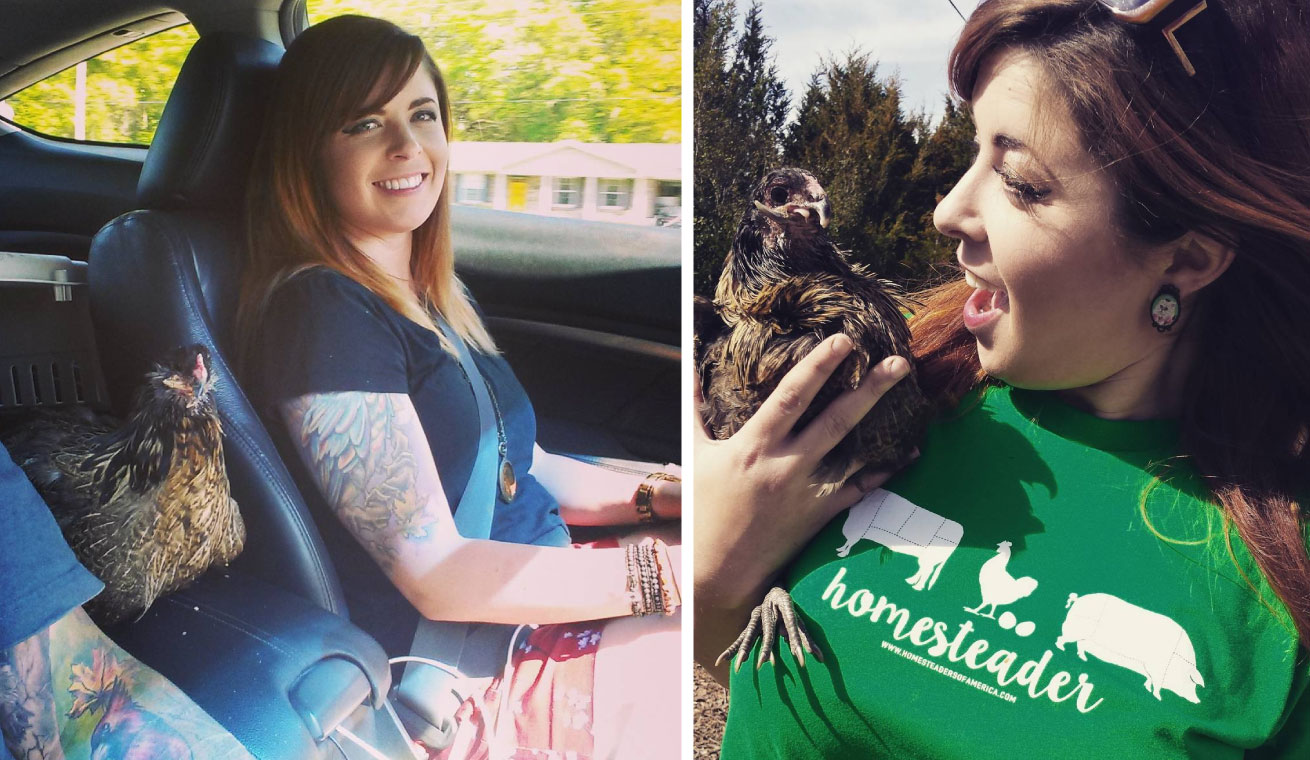 Spike and Sarah
When Spike first arrived (from an online hatchery), her beak was normal and looked no different than the other ten chicks she arrived with. It wasn’t until she was a couple weeks old that Sarah noticed there was something wrong with her beak—the top and bottom did not align properly. Her lower beak progressively deviated even further out of alignment with the upper portion. Soon it started impacting her ability to eat and drink. This was when they started providing extra support to Spike because of her disability. 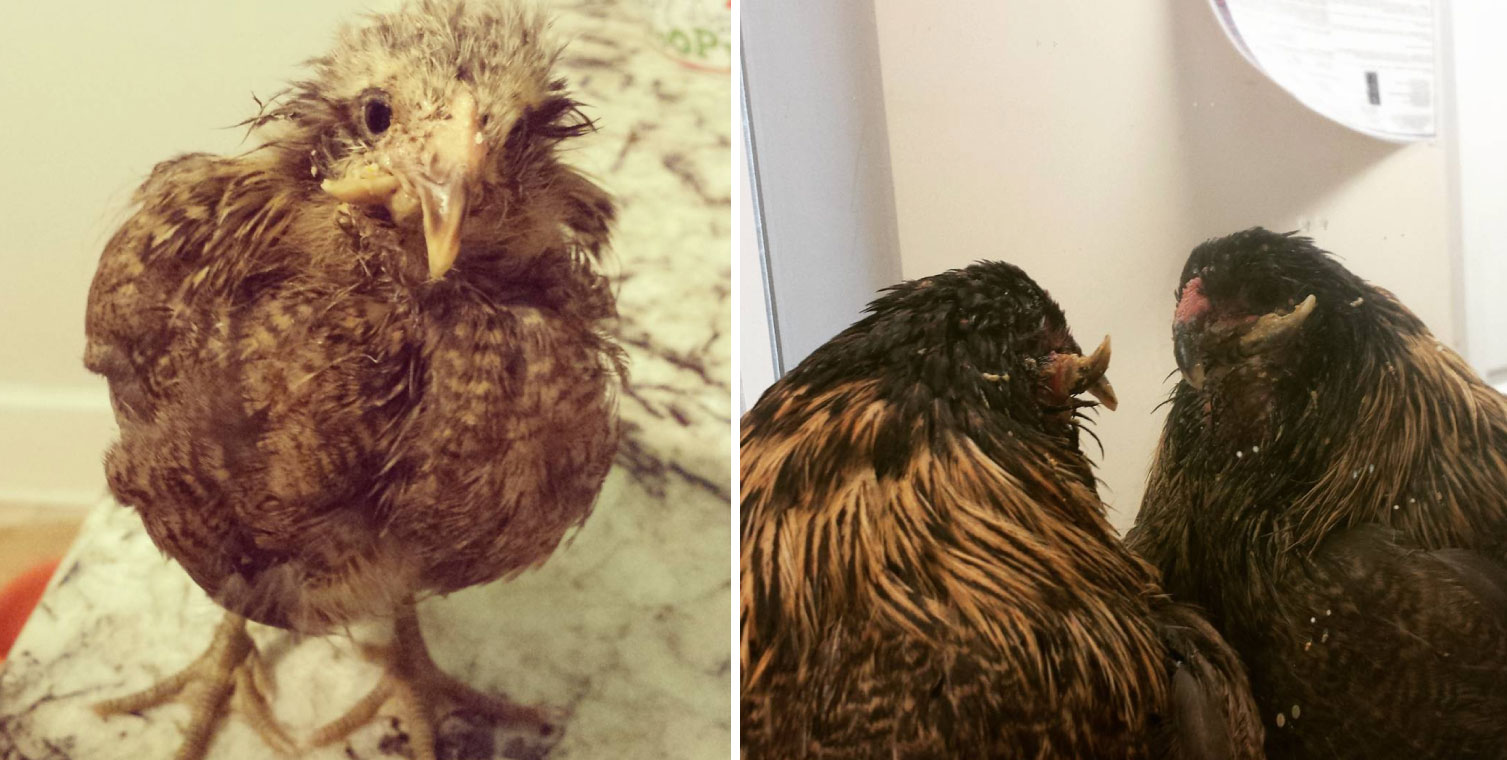 Baby Spike (left photo), and Adult Spike admiring herself in the mirror (right photo)
Instead of free choice chicken feed, Spike was syringe/tube fed her meals 4 times a day---which consisted of a combination of pelleted layer feed (16% protein) mixed with twice as much water using a blender to create a puree. They would prepare her meals anywhere from 12-24 hours in advance, and store it in the refrigerator until feeding time.

Whenever Spike isn’t with her humans at work, or on vacation with them, she lives outside in a predator-proof coop with 18 other chickens, who all get along very well together. None of the other members of the flock mess with her, as she isn’t scared to go after anybody who tries to pick on her. 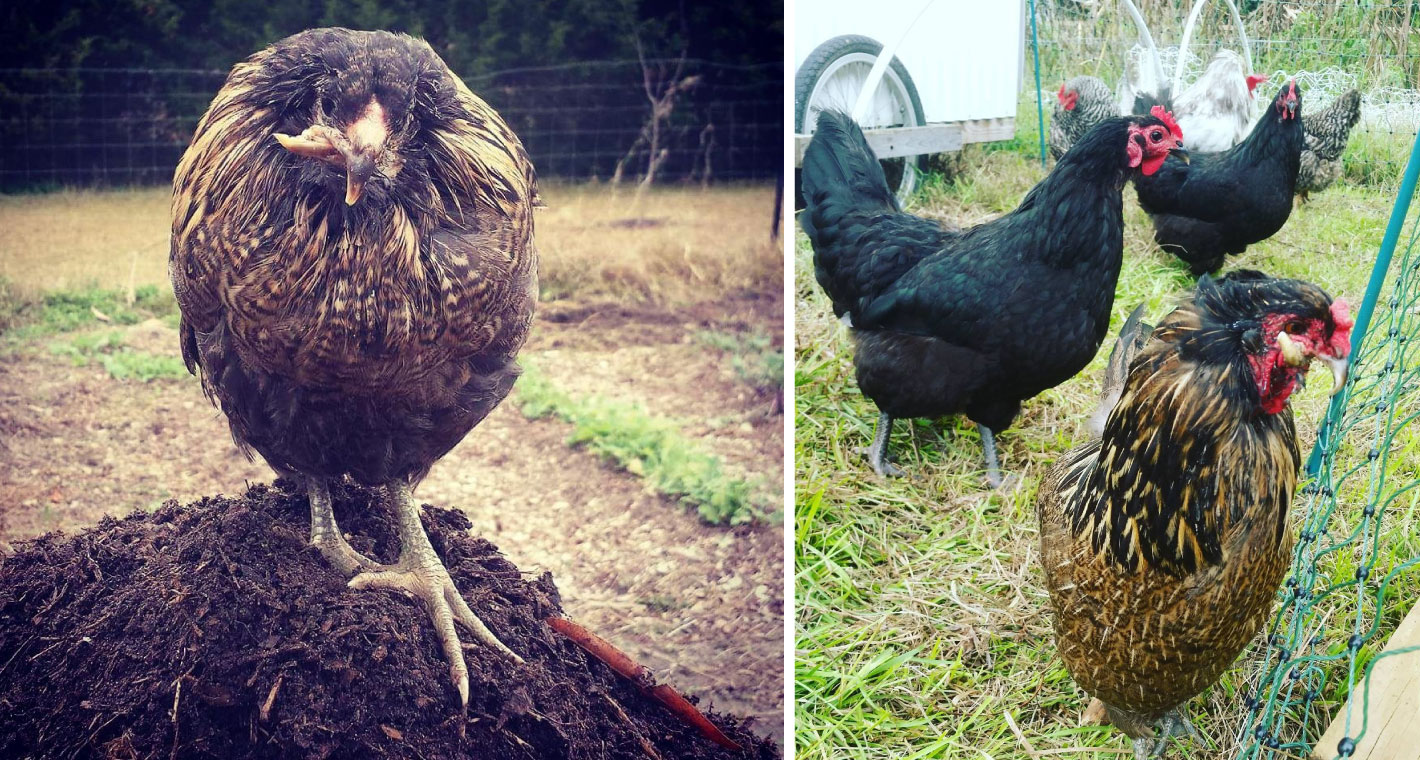 One morning, Sarah noticed Spike’s crop appeared enlarged---about twice its normal size actually, and it felt really squishy (similar in texture to a small water balloon). With each breath, her crop made “gurgly”-like sounds. Spike also wasn’t acting like her normal self, and seemed very lethargic and disinterested in food.

Sarah initially gave Spike some probiotics, nutridrench, and dewormer with water. Nothing seemed to be helping, and Sarah was really worried---so she called and made an appointment for Spike to visit with their local veterinarian, Paws & Claws.

It was Spike’s first vet visit, but she charmed everyone at the vet clinic---including her doctor! Upon arrival, Dr. Stephen Anderson asked Sarah questions about Spike’s history, while giving her a physical exam. He palpated her crop and noted the delayed crop emptying. Spike was diagnosed with a crop infection, known commonly as sour crop.

The Moys in the waiting room w/ Spike (left photo) and Spike getting examined by Dr. Stephen Anderson (right photo)
Dr. Anderson suggested the cause was likely in relation to the length of time Spike’s pureed meals were stored (which was typically between 12 to 24 hours). He suggested modifying this to no longer than 6 hours duration off storage.

Spike was prescribed Nystatin, an antifungal medication used commonly for treating sour crop, administered by mouth 3 times a day, for 7 days. Sarah gave Spike her first dose shortly after leaving the vet’s office. As soon as Sarah gave Spike her first dose of the medication, the hen’s behavior seemed to almost instantly improve—Sarah could tell Spike felt much better. About an hour later Sarah fed Spike her normal meal for the evening. By the next morning, Spike was almost back to her old self, and her appetite had returned. By the third dose of medication, Spike had fully recovered.

What the Moys' Learned from this Experience

“We learned that when preparing a special food for your chicken, to keep it fresh and not to make it in large batches. We now make her feed on demand and don’t let it sit for longer than 6 hours at a time. If you do, the food can ferment and this is what led to her yeast infection of the crop. BTW, her food is pureed chicken food. Recipe is 1 part feed, 2 parts water, and we blend that in a small blender.” 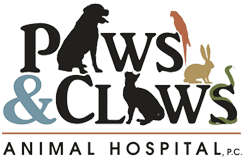 Paws & Claws Animal Hospital is a full-service veterinary clinic located in Wilmington, NC that cares for cats and dogs, as well as all kinds of exotic animals and local injured wildlife. The staff members at Paws & Claws Animal Hospital are always professional and courteous, and they strive to deliver the best possible medical, surgical and dental care to all of their highly valued patients. They are totally committed to their clients and to promoting responsible pet ownership, preventative health care and health-related educational opportunities.