Pepper Pot is a Crested Polish hen who was the victim of aggressive pecking. Her owners were trying to introduce their Polish chickens to an established flock of Rhode Island Reds. They noticed that Pepper Pot was getting picked on by the other birds, and removed her from the flock. To their dismay, the skin covering the back of Pepper Pot’s head was completely gone. Recognizing the severity and urgency of the situation, they immediately sought veterinary care and brought her to Dr. Rebecca Gounaris at the Pleasantville Animal Hospital of Fallston.

Upon arrival, Pepper Pot was still alert but Dr. Rebecca Gounaris could tell that she was in pain. On examination, Dr. Rebecca found a large open wound at the base of Pepper Pot’s skull that extended down her neck. When further explored, Dr. Rebecca discovered that the hen had been pecked so badly, that her muscle, tendons, and even veins were completely exposed. Luckily, nothing was damaged.

Photos of the open wound on the back of Pepper Pot’s head and neck
After cleaning out the wound and removing any diseased tissue, Dr. Rebecca was able to close the wound entirely thanks to the amazing elasticity of Pepper Pot’s skin, as you can see from the before and after pictures below.

Pepper Pot’s injury before (left photo) and after it was sutured closed (right photo)
Pepper Pot was discharged from the hospital with antibiotics and pain medication. She was kept separate from the other chickens during her recovery, and received supportive care plenty of love and attention.

Several weeks later, Pepper Pot returned to the Pleasantville Animal Hospital of Fallston for her follow up visit with Dr. Rebecca. The hen had fully recovered from her head injury!

Photos of Pepper Pot’s head injury at her follow up appointment with Dr. Rebecca
Every flock of chickens has their own specific hierarchy or “pecking order”. Each bird has a certain status, which refers to their position or rank in relation to every other bird. Whenever new chickens are introduced into a flock, there is often increased aggression amongst the birds until each has established their position in the flock. However, sometimes an excessive amount of pecking is directed towards certain birds—or breeds. Polish chickens have a reputation for being low in the pecking order, since they are very docile and have an attractive set of feathers on the top of their head (known as a crest). 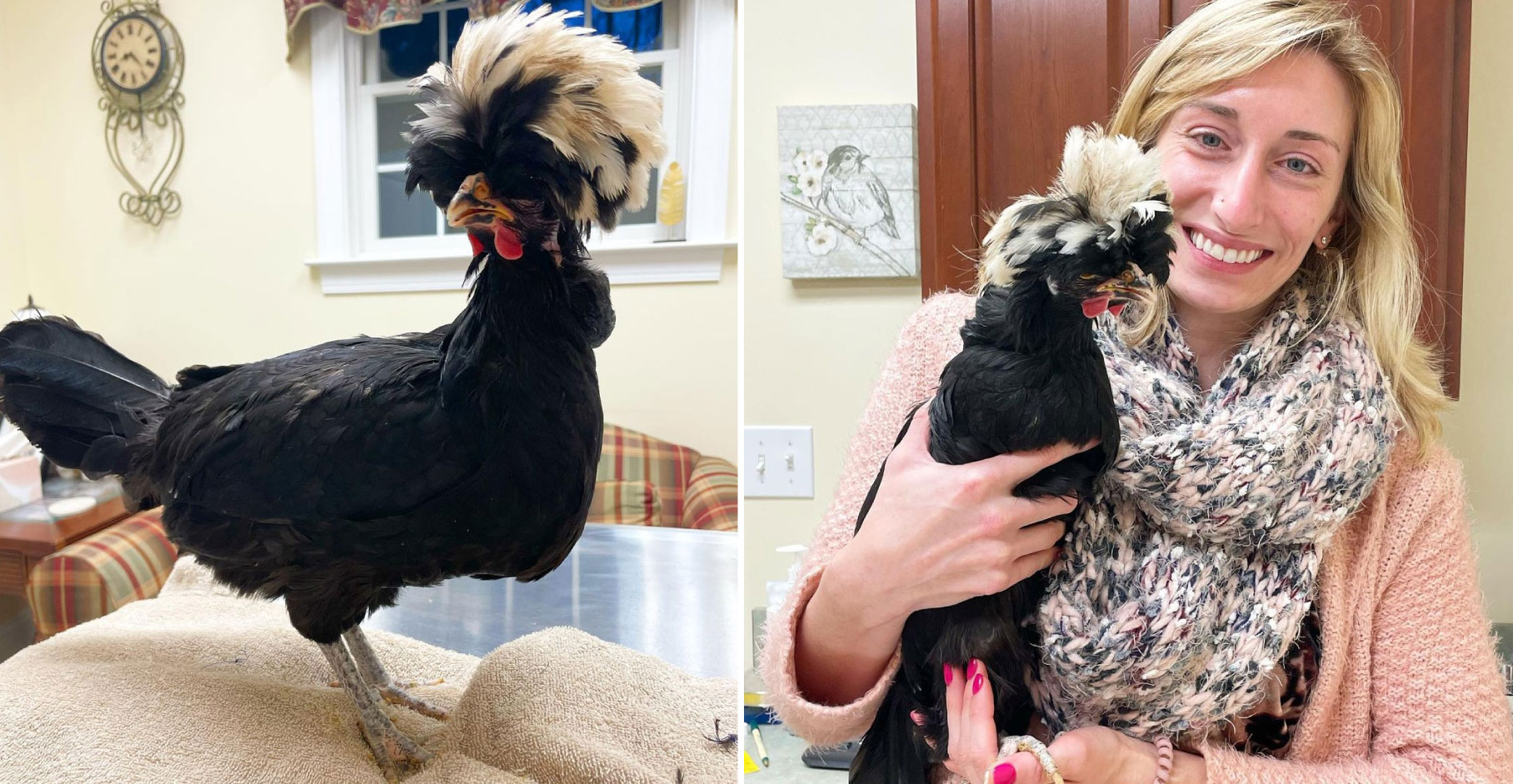 Photo of Pepper Pot strutting her beautiful fully recovered crest (left) and posing for a photo with Dr. Rebecca, who saved her life
Once Pepper Pot recovered, she was integrated back into her original flock of Polish hen friends. Given the recent events with Pepper Pot, her owners decided against combining the Polish flock with the Rhode Island Reds in order to prevent further incidents.

However, this doesn’t mean that Polish chickens should never be kept with other breeds, as they often can co-exist together just fine. But the approach to introducing them (and really any new chicken in general) should be more gradual. It should also be done in a neutral area with plenty of space, and under close supervision. Providing foraging enrichment items or even scattering mealworms across the ground are also beneficial tools to help prevent aggressive behavior.


About Pleasantville Animal Hospital of Fallston

Pleasantville Animal Hospital of Fallston, located in Fallston, Maryland, is a family-owned, full-service hospital that provides veterinary services for dogs, cats and birds. Their expertise in the field now spans over three family generations, and they are very proud of this unique heritage. The hospital has an in-house laboratory, allowing for rapid diagnostic testing for critical care patients, digital radiography (xrays), surgical suite, and an on-site pharmacy. Dr. Scott Gounaris has been practicing veterinary medicine for 35 years and founded Pleasantville Animal Hospital in 2002. His daughter, Dr. Rebecca Gounaris, now works alongside him, and they approach each case as a team.

Dr. Rebecca L. Gounaris is a 2016 graduate of the Virginia-Maryland College of Veterinary Medicine and is Dr. Scott Gounaris's oldest child. In addition to her lifetime love for cats and dogs, she has a deep passion for birds and participated in externships at several exotic veterinary clinics during her senior year. She has also worked for many years at Tri-State Bird Rescue & Research in Newark, DE, starting while she was earning her undergraduate degree at University of Delaware, and continues to provide veterinary care there to wild birds in need. After spending much time away from home for her education, she is thrilled to be practicing medicine back in her hometown and alongside her family members. She is a member of the Avian Association of Veterinarians, American Veterinary Medical Association, and Maryland Veterinary Medical Association. She also competes in synchronized ice skating and has two cats, Arwen and Pippin, a Sun Conure, Nino, and a Green-cheek Conure, Dutch.

Dr. Scott Gounaris graduated from the University of Florida Veterinary School in 1982. His lifetime love for animals drove him to choose veterinary medicine as he wanted to help animals that could not help themselves. Dr. Scott Gounaris enjoys the teamwork that we and the pet owners employ to work together for the welfare of their pets. The greatest reward for him is a positive outcome for his patient and their owners. With over 40 years of experience in the veterinary field, Dr. Scott Gounaris has seen it all. Prior to opening Pleasantville Animal Hospital of Fallston, he worked for his father, who was also a veterinarian. Now the father of a recent veterinary school graduate, a current veterinary school student, and a college undergraduate, he has shared his love of the profession with the next generation of Gounaris doctors.