Once upon a time there was a rooster named Oscar. Oscar is very deceiving by his appearance. He is very tiny and cute—being a bantam rooster and all, however he is fierce. Looking at him in comparison to the other four members of his bachelor rooster flock, you would never guess that he was actually the boss of rooster land.

Oscar even has other roosters who carry out his biddings----Zoolander, his second in command, frequently makes threats and attacks towards other roosters by order of Oscar. Oscar is a bit obsessed with another rooster in the enclosure next to him named Simon, who he constantly plots ways to attack....when he isn’t keeping the other roosters in line of course.

Left photo – Oscar and Simon making faces at each other; Right photo – Oscar recruiting Zoolander to help him make faces at Simon.
One morning, Oscar’s caretaker came out to feed the chickens, and was horrified to find Oscar hanging upside down. He had managed to entangle both of his overgrown spurs in the chain link fencing.

Oscar hanging upside down, his spurs entangled in the chain link fencing
After getting Oscar upright again, his caretaker immediately examined in legs to see whether he was injured. There was blood, bruising, and swelling at the base of the spur on both legs.

When Oscar attempted to walk, he held his legs in an abnormally wide stance and would fall over every time he tried to take a step forward. His caretaker immediately called Leesburg Veterinary Hospital and made an emergency appointment for Oscar to see Dr. Strickland. 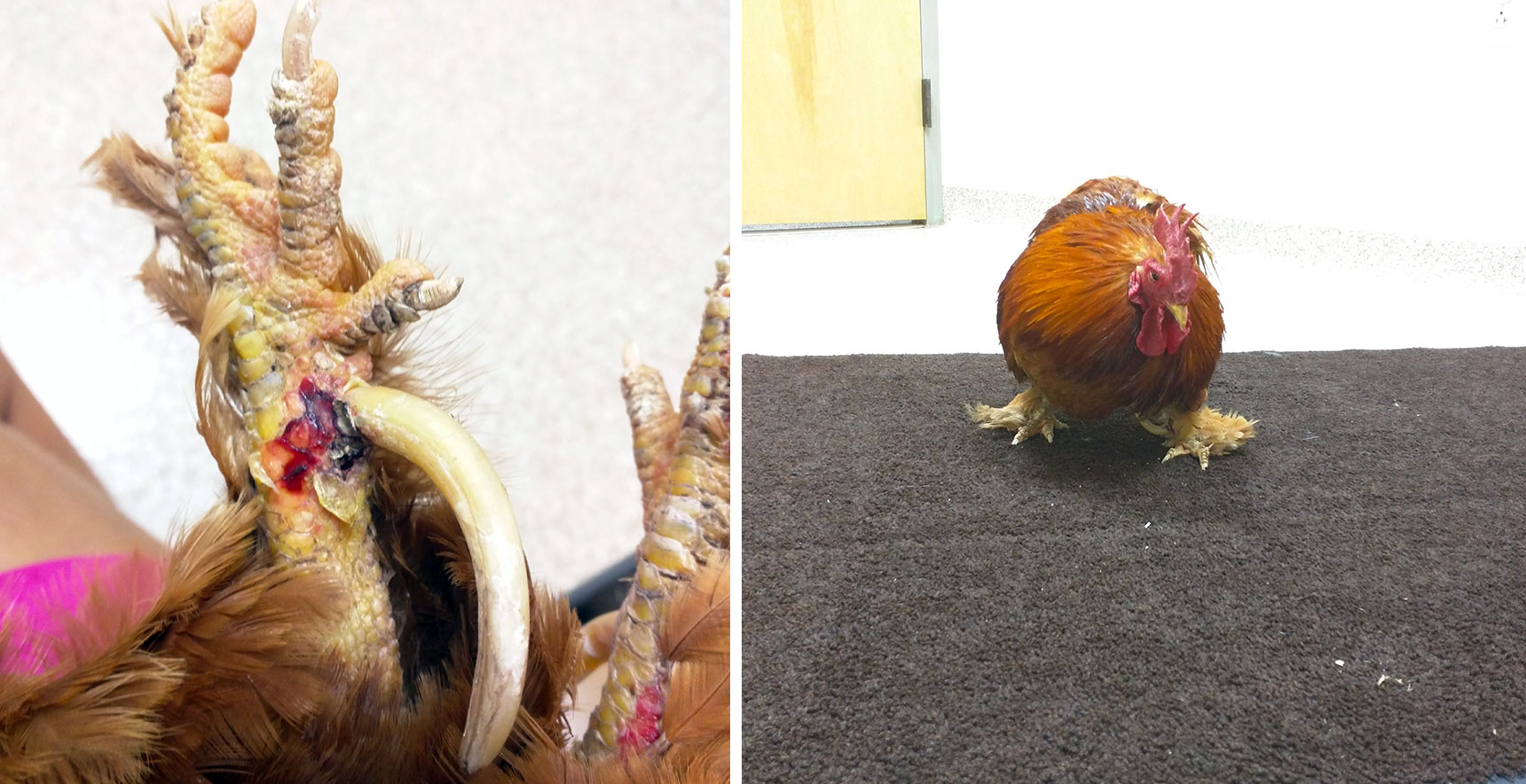 Left photo – Oscar’s injured legs; Right photo – Oscar attempting to walk during his examination
Oscar was given a physical and lameness exam and radiographs were taken of his legs to ensure that there was no fractures. Thankfully there wasn’t.

Oscar’s wounds were cleaned and his spurs trimmed and dremeled to just before the bone started. The radiographs were actually a useful guide for determining where this point was.

Left photo – Oscar’s radiographs; Right photo – Oscar getting his spurs trimmed and dremeled.
Upon arrival back home in rooster land, Oscar was given some pain medication and put on bedrest. His recovery kennel was kept very clean and was placed within the rooster enclosure, so that he would not get lonely and still be able to interact with his other rooster friends.

A couple weeks later, once Oscar was walking normally again and the wounds fully healed, his caretaker planned to slowly reintroduce him back into his bachelor flock.

Left photo – Oscar relaxing in his little recovery area, set up within the rooster run; Right photo – Oscar’s leg healed and spurs trimmed back.
However, there seemed to be a complication----Oscar was no longer treated as the ruler by the other roosters. It seemed during his absence he lost this rank in command. During his first reintroduction session (which was closely monitored), the other roosters started ganging up on Oscar. During the next session, Oscar simply took off running---to get as far away from the other roosters as he could.

To reduce the risk of Oscar being seriously injured or even killed by the other birds, different tactics were tried---some of which included putting the other roosters in isolation for a day while letting Oscar freely walk about the run, continued monitored play sessions, and added enrichment items.

Left photo – Mozart challenging Oscar to a duel; Right photo – Oscar running off on his own, away from the other roosters.
Ultimately, Oscar’s caretaker made the decision to find a new home for the main rooster responsible for initiating the attacks on Oscar---his former best friend, Zoolander. Zoolander was found a wonderful, no-kill home where he would have the opportunity to take care of a flock of hens of his own, with a family who adored him.

Left photo – Oscar and Mozart getting along again, and relaxing in their new ‘home base’; Right photo – Overview of the new arrangement of the rooster run
Without Zoolander, there was no multi-rooster attacks on Oscar. However, the dynamics of the flock pecking order had also forever changed. Oscar is now the lowest ranking member of the flock. However, he is in no danger of being attacked, because he'll quickly show submission to the other roosters (meaning he has rightfully accepted his lower position). He and Mozart are now better friends, and they perch together every night in a different area of the enclosure.

Leesburg Veterinary Hospital has been a prominent fixture in the Loudoun County community for almost thirty years. From 1985-2011, their practice was privileged to grow in downtown Leesburg, where they established a loyal client and patient following. To best serve their patients, practice owner Dr. Michael Strickland envisioned and designed a new facility that would provide the highest standards of veterinary care while encompassing the true Loudoun County lifestyle. Since June 2011, they have been practicing out of a free-standing, state-of-the-art facility on Route 15, just south of town. A rustic and casual retreat, coupled with the best veterinary technology available, every inch of their new hospital was created with their clients and patients in mind.