Obi is a 2-year-old Buff Orpington hen who is kept as a pet along with several other hens. One evening, Obi’s owners noticed that Obi had injured her beak somehow. The next day, they scheduled an appointment for Obi at the Cat and Bird Clinic in Santa Barbara, California for later that same day.

Upon arrival, Dr. Kelsey Grunewald gave Obi a physical exam. The hen was bright and alert, and in otherwise good condition, other than the damage sustained to the lower portion of her top beak. Even just touching that portion of the beak caused Obi discomfort.

The injury sustained was nearly full thickness and there was concern that it would break off completely as she went about her daily routine. These types of injuries are very painful and can quickly affect the bird’s ability to eat.

Dr. Grunewald gave Obi pain medication, and applied a dental acrylic beak prosthesis on the top part of the hen’s beak. This would allow the end of the beak to heal and grow out with normal apposition.

Once the acrylic was set, Obi was discharged from the clinic. Obi’s owner was given a prescription of pain medication to give to Obi as needed. If Obi showed any discomfort eating her usual diet of poultry feed, Dr. Grunewald recommended offering the hen softer foods, such as chopped fruits and even emeraide which could be spoon fed to her.

Obi’s owners kept Obi inside their house for the duration of her recovery, giving her supportive care and plenty of love and attention. One month later, Obi was brought back to the Cat and Bird Clinic for a recheck with Dr. Grunewald. She was pleased to see that Obi’s beak had completely healed. 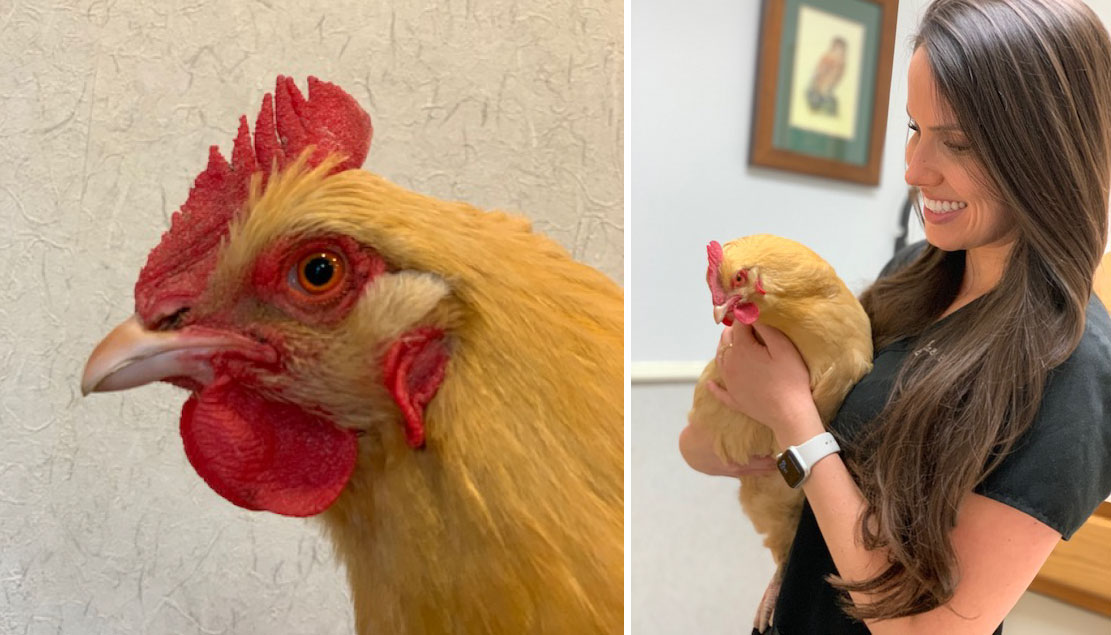 About The Cat and Bird Clinic

The Cat and Bird Clinic is a veterinary clinic located in Santa Barbara, California which exclusively caters to for cats, birds and wildlife. The practice first opened in July of 1992. Being a dog-free clinic, it provides a much more welcoming and less stressful environment for their patients. Dogs are not the priority here, your birds are!

Dr. Sellers, a Santa Barbara native, completed her undergraduate degrees in Zoology and Nutrition and then her Doctorate of Veterinary Medicine at U.C. Davis in 1991. As there was no emphasis on avian medicine at U.C. Davis in 1991, Dr. Sellers designed her own Pet Bird Medical track where she spent her senior year traveling throughout California interning with avian specialists and poultry facilities. Dr. Sellers has been actively involved in avian medicine since 1983. She began her feline focus when she began working at The Cat and Bird Clinic (formerly known as The Cat Clinic) in 1985. Dr. Sellers has been the owner and primary veterinarian of The Cat and Bird Clinic since 1992. Dr. Sellers belongs to many organizations to keep abreast of the most current medical breakthroughs. Memberships include AAFT, AAV, AVMA, & CVMA.

Dr. Kelsey Grunewald was born and raised in Santa Barbara, California. She started her journey in veterinary medicine at the young age of 10 when she started volunteering at the Cat and Bird Clinic. She completed her Bachelor's degree in Zoology at UC Santa Barbara and graduated from Midwestern University with her Doctorate of Veterinary Medicine. While at Midwestern University she started, and was president of, the first avian medicine club on campus and was also part of the zoo and exotics club. She is a Fear Free certified professional through FearFreePets, which provides training to help alleviate fear, anxiety and stress in pets during veterinary visits. She also volunteers her time providing medical care at the Santa Barbara Zoo. Memberships include AAFP (American association of feline practitioners), AAV (Association of avian veterinarians) and AVMA (American Veterinary Medical Association).