One October afternoon, Katya stopped by the Seattle Animal Shelter to pick up a rooster who was abandoned by his previous owner. A shelter volunteer led her back to the kennels where he was being kept. The rooster was in a dog kennel in a private holding space within the shelter. He was not alone—a little barred hen was in a dog kennel adjacent to him. However, this hen did not look well---she was laying down and wasn’t moving much, which is not typical behavior for a healthy chicken.

Katya asked the shelter volunteer whether she could also adopt the sickly hen as well. She was told that unfortunately, the hen was not available for transfer yet to another location---Katya would need to wait and return in a couple more days. Katya knows this the rooster was not the first chicken she had rescued. She and her wife, Hope, cofounded Heartwood Haven Sanctuary, where they care for 21 other roosters, two hens, two goats, a dog and cat, who were all in need of a home. Porter was the first rooster they rescued, he is ex-cockfighting rooster who was rescued from a cruelty case earlier this year. After rescuing Porter, more roosters were showing up as strays or abandoned at the shelter and they found a home with Katya and Hope. Most of the rooster live happily in a bachelor flock together. The two hens were both discarded by their previous owners because they weren’t laying as many eggs as their owners wanted. Eventually it only made sense to legally become a nonprofit corporation; they are currently in the process of filing documents to become a 501(c)3 nonprofit organization.

Fortunately the shelter called back when Katya was just 5 minutes away with the go ahead to transfer Khaleesi. Katya inquired about the Khaleesi’s history---how she ended up at the shelter, and what treatment she had been given while under their care.

Khaleesi getting adopted at the Seattle Animal Shelter
The shelter staff answered Katya’s questions, and explained how the hen was found as a stray—roaming the streets of the City of Seattle alone and scared. She was very lucky she wasn’t hit by a car or killed by a predator---which is the fate of most chickens that are abandoned.

Usually this is the suffered fate of most roosters, however with her being a hen it was likely that she was kept on a wire floor in filthy conditions for the first 2 years of her life, and as soon as she stopped producing eggs she was thrown into the street. The shelter also informed her that Khaleesi was examined by the shelter veterinarian when she first arrived, and had received Ivermectin, a routine treatment for all intakes that takes care of various parasites including mites and worms. They also indicated that she had Bumblefoot.

Khaleesi, which is Dothraki for “queen”, is one of the three chickens at the sanctuary named after the Game of Thrones characters. Like her namesake, the hen was also left on her own and has a spunky personality fit for a queen and world domination. 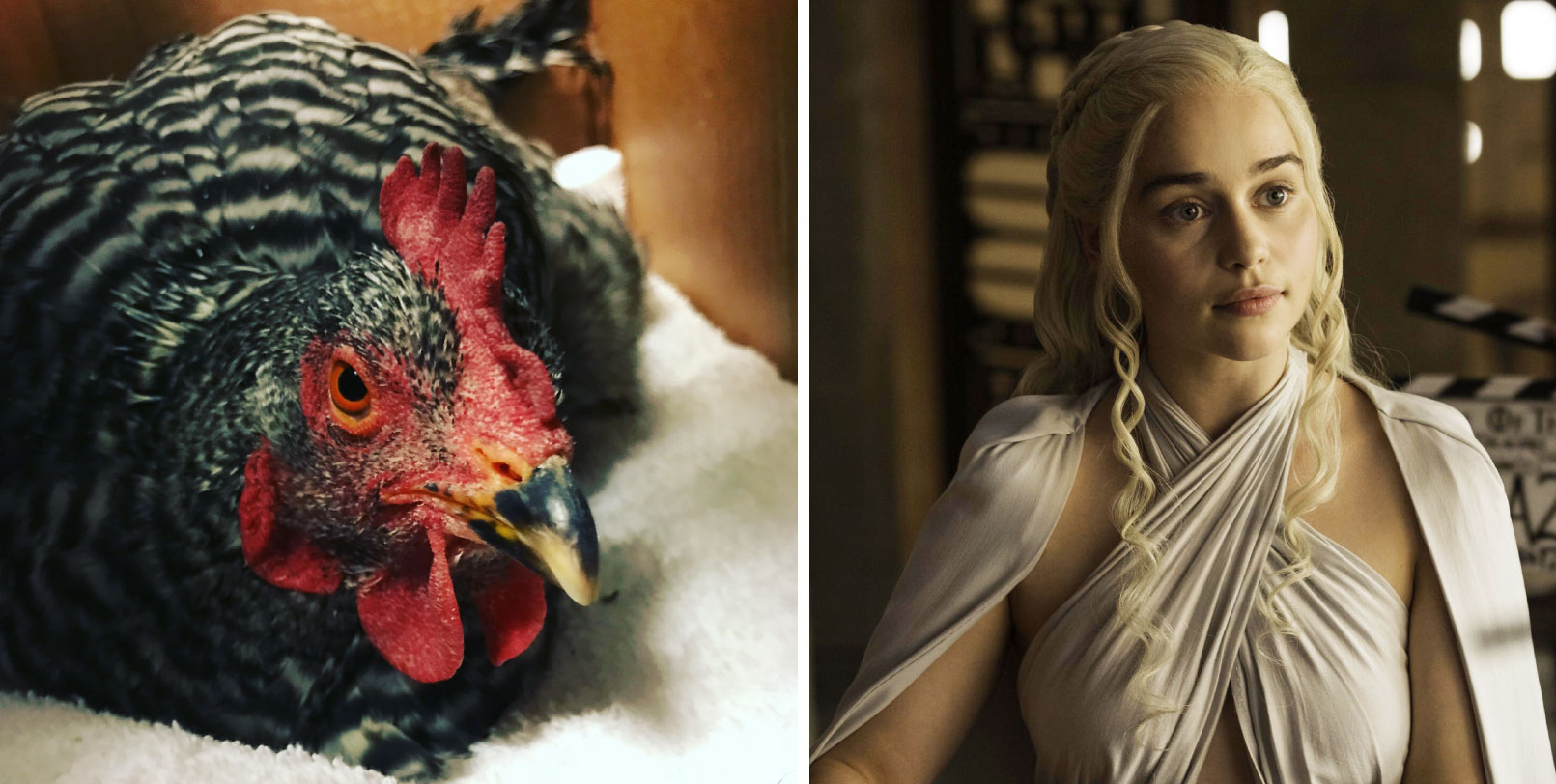 Khaleesi the hen versus Khaleesi the Game of Thrones Character
“On the ferry home I noticed she ate a whole banana and finally got enough strength to stand for a short while. While standing I noticed the terrible condition her feet are in.” Katya described in her Instagram post. The hen’s feet were absolutely filthy---in fact, Katya almost vomited at how bad they looked. It was apparent that the shelter had not treated the hen’s feet for the alleged Bumblefoot whatsoever. There was old, crusty dead skin and feces caked on dirt all over both of her feet that looked like it had been that way for months.

Khaleesi’s dirty, crusty feet
As soon as Khaleesi arrived back at the sanctuary, Katya and Hope washed and soaked her feet in warm water for a good 20 minutes. After Khaleesi’s feet had softened, using a paper towel, it was easy to gently remove the dirt, feces, and dead skin. Once clean, the scabs and discoloration of her feet became much more obvious. It was no wonder the hen had difficulty standing on her feet. Hope wrapped the hen’s feet and made an appointment for Khaleesi to see the veterinarian the next morning.

The discoloration and scabbing on the bottom of Khaleesi’s feet
The next day, Katya’s wife and Sanctuary co-founder, Hope brought Khaleesi to see their veterinarian. Once in the examination room, the doctor ran a fecal test (to test for the presence of parasites in her feces) and took a thorough look over Khaleesi’s feet. He looked at the hen’s feet under a microscope (since scaly leg mites are so tiny, the naked eye cannot see them). He did not see any scaly leg mites, nor did she have Bumblefoot. What the doctor did see however, were tiny bite marks. It became apparent that Khaleesi’s feet had been chewed on by rats. Khaleesi was misdiagnosed by the shelter veterinarian. The hen was suffering from a bite-associated secondary bacterial infection in both her feet, caused by the rats chewing on her feet.

Khaleesi was prescribed several oral medications, Trimethoprim Sulfa (antibiotic), Celebrex (anti-inflammatory), and Fluconazole (antifungal), to treat the infection for the next 14 days. The doctor also recommended soaking the hen’s feet for 15 minutes in a dilute chlorhexidine solution, twice a day for the next 10 days.

Khaleesi receiving one of her daily feet soakings
Katya and Hope realized that Khaleesi would require intensive supportive care throughout her recovery, and close supervision. Using some left over wire mesh, they fenced off a small 5’x10’ space for Khaleesi inside the house. To make clean-up easier, they put down a layer of cardboard for the first layer, covered with layers paper which get changed on a daily basis. This is an easy way to section of a part of a room for treatment. Hope also constructed a quarantine enclosure that Khaleesi will stay in until her feet are all healed. They made sure Khaleesi had easy access to feed and fresh water at all times, and gave her fresh greens and fruit to help provide her some additional vitamins.

Khaleesi’s recovery area
For the first couple of days, Khaleesi spent most of her time laying down and sleeping. She had little to no appetite and did not have enough energy even to preen her feathers (for a normal healthy chicken, this is a daily activity). After a few days of treatment and supportive care, Khaleesi started to feel better. She regained her appetite, started to walk around and explore her surroundings, and preen her feathers. Her personality started to finally show—which fit her name perfectly! Khaleesi is a very strong-willed and inquisitive little hen who is delighted to be given the opportunity at a chance to live a happy life—not just for what she can give in terms of number of eggs laid, but for who she is as an individual, a lady, a warrior!

Our sweet girl Khaleesi passed away on Wednesday Nov. 22, 2017. She was with us for two and a half weeks and seemed to be doing great. She had seen the vet and finished all three prescribed medications. She was spunky and eating well and walking around and took a dust bath outside. Her feet were getting all better and we were sure that she was going to be fine. On Wednesday morning, Khaleesi never woke up. And so our hearts shattered into a million pieces; we were not ready for this. We had a necropsy performed on Khaleesi’s body to find out the cause of death. We just received the results: Severe fungal pneumonia and hepatitis. We knew that she came from a neglectful situation based on the fact that she was dumped by her owners in the city and she had infected feet from rat bites. The pathology results reveal that it was so much worse. To get fungal pneumonia, Khaleesi was living in a wet moldy environment. Hepatitis is spread through ingesting infected fecal matter or blood and can be easily transmitted in crowded filthy conditions. The report also shows that her foot pads were calloused, our guess is from being on a wire or otherwise unsuitable floor. And her ovary is atrophied and out of production, something that happens with old age. What we are left with are the memories of giving Khaleesi foot soaks and feeding her greens and blueberries. We know that at least for two and a half weeks, Khaleesi had a warm place to sleep, a clean place to live, lots of tasty snacks and she was treated like a person. RIP Sweet Girl

A post shared by Enchanted Forest Sanctuary (@enchantedforestsanctuary) on Nov 27, 2017 at 8:27pm PST

Heartwood Haven Sanctuary is a nonprofit organization, founded in 2017. They are based out of Gig Harbor, WA. Their mission is to rescue and care for neglected, abused, abandoned or homeless animals. They promote a vegan lifestyle as the best way to treat animals, the environment, and human health.