Once upon a time there was a small flock of hens who lived in the backyard in an urban residential neighborhood in Santa Cruz, California. The family who looked after the hens also had several dogs on the same property. The dogs had a history of attacking and injuring the hens. Judy, who was the oldest and alpha hen of the flock, was one such victim. Thankfully, her owner discovered her quick enough, and she was promptly brought in to see her veterinarian. Dr. Smith repaired her wounds and sent her home to recover.

Several months later, there was yet another dog attack. This time one of the dogs got into the chicken coop and again, targeted Judy. Judy was quickly brought in to see Dr. Smith, however this time her owner did not wish to save her, she immediately requested her to be euthanized.

Dr. Smith was quite surprised, for although the hen’s injury needed to be repaired, it was not fatal. The hen was standing upright, bright and alert. She also still had her appetite, for when offered feed she eagerly pecked and ate it.

The doctor explained to the woman that the fact that Judy was still standing and alert were positive signs, and that in his experience, he found chickens to be very resilient---if given the opportunity. However, the woman didn’t care, she was adamant about putting Judy down. Dr. Smith asked the woman if she’d be willing to sign over custody/ownership of the hen to the clinic, so that he could save her, instead of putting her down. Her response revealed the true reason behind her eagerness to euthanize Judy...

"Whatever, yeah okay, she doesn’t lay anymore anyway.....” she said, as she signed over ownership and without a second glance at Judy, left the clinic.

After the woman left, Dr. Smith moved Judy onto the surgical table to fully examine the extent of her injuries. The dog bit her along her back and right thigh region, leaving a 7 in long x 2 in wide ripped laceration.

Anesthesia was induced and Judy was intubated and maintained on 2% isoflurane and 1 L/min oxygen for the next 45 minutes. During this time, he plucked, cleaned, debrided, flushed the wound with saline and chlorhexidine solution, and sutured closed. Judy was started on a 3-day course of injectable antibiotics and pain medication. After 3 days, she was switched to oral antibiotics. The antibiotics were important because dogs (both domestic and wild) carry lots of potentially harmful bacteria in their mouths, which gets passed into the bird when attacked. 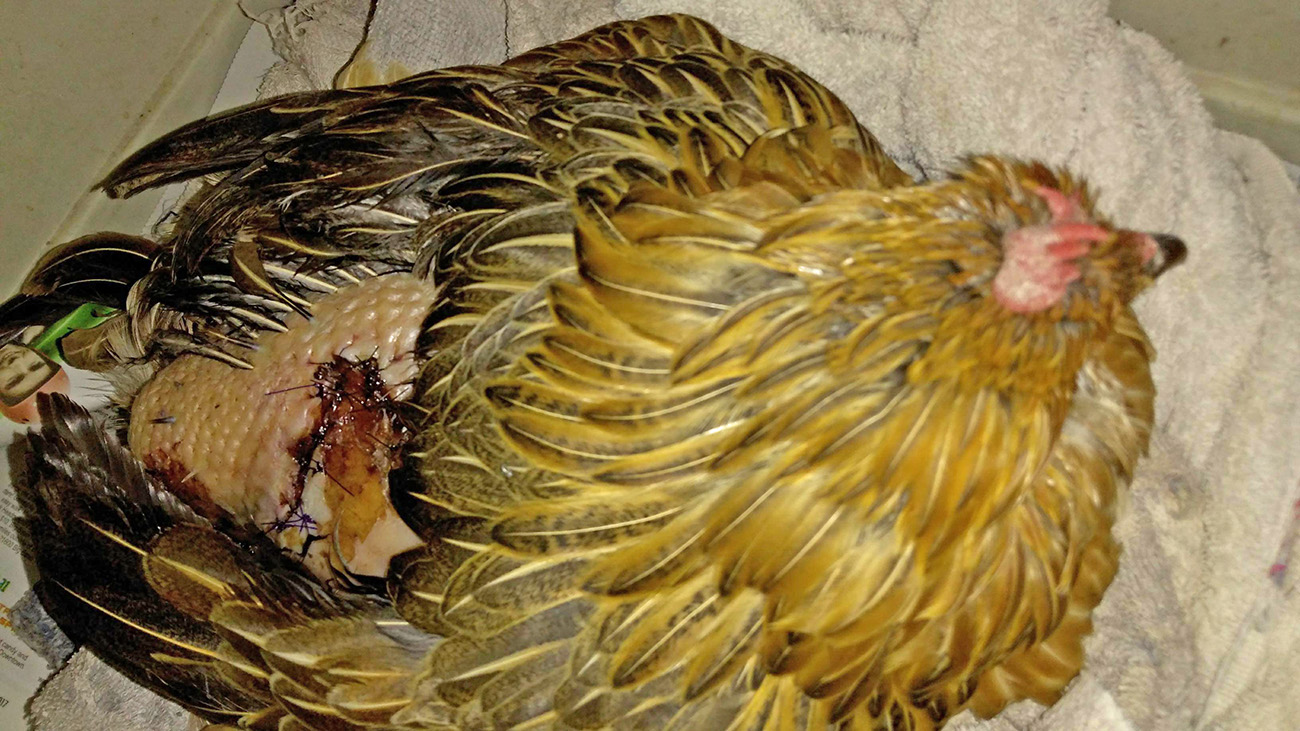 Judy resting comfortably
Once Judy was all patched up and awoke from the anesthesia, Dr. Smith realized that he needed to find her a new home. He asked one of the veterinary technicians at the clinic to ring Hen Harbor, an animal sanctuary nearby which focuses on rescuing and rehabbing chickens and other fowl. Ariana, the founder of Hen Harbor, indicated that she was more than happy to give Judy a home at her sanctuary, and for them to bring her by whenever. 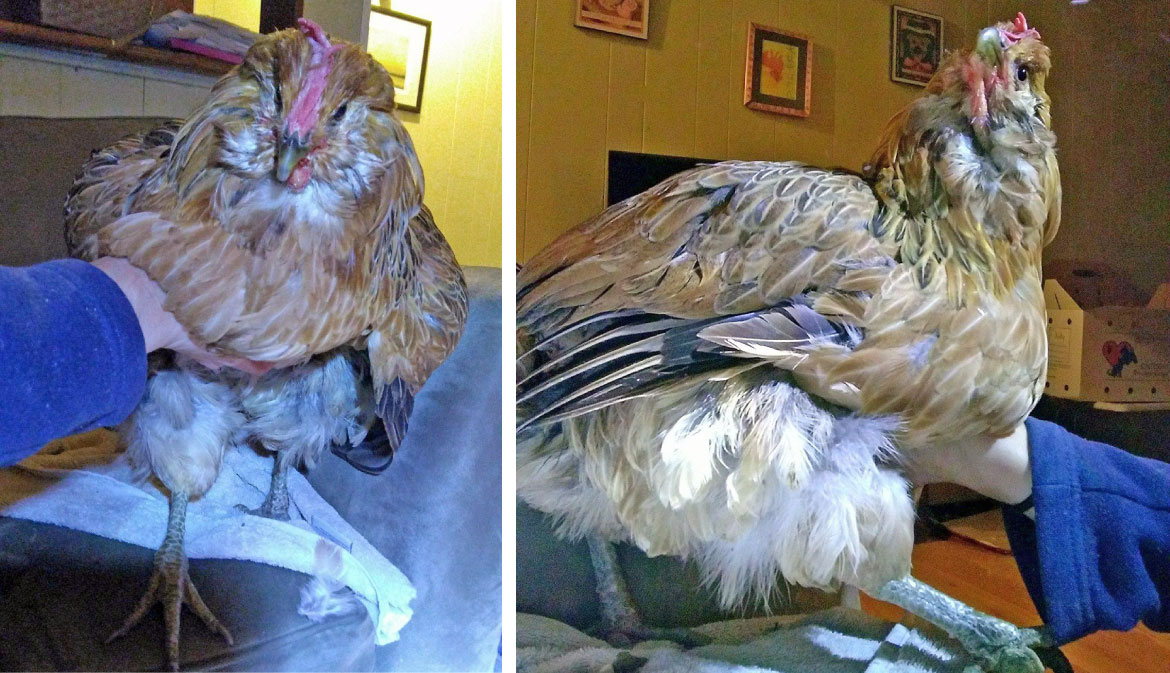 Judy having difficulty standing
When Judy arrived at Hen Harbor, Ariana noticed the hen was having difficulty walking, and was sitting with her right leg (the leg which was injured) stuck out in front of her body. The good news was that Judy was active, alert, and had a good appetite. At first, Dr. Smith just thought that it was a side effect from the anesthesia.

The next morning, Ariana checked on Judy and noticed the hen was still having difficulty walking. She contacted Dr. Smith to let him know what was happening, since he was getting prepared to travel to southern California later that afternoon. Just to be safe, Dr. Smith thought it best to take Judy with him so he could perform further diagnostics if need be (take radiographs of Judy’s leg).

Once back in Los Angeles, Dr. Smith set Judy up in a small recovery area at his office, with another patient in recovery. Judy was paired with Maggie, a bunny Dr. Smith inherited as another relinquished animal from a client. This time, the client wanted to euthanize their pet bunny for having maggots in a wound for a second time. Judy and Maggie got along wonderfully and quickly became friends, except Maggie wasn’t all too keen on Judy eating all her lettuce and kale! 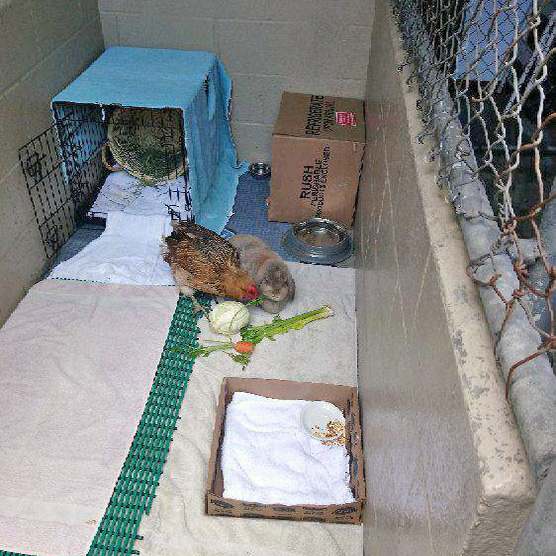 Judy with her recovery friend Maggie the bunny
Judy slowly began putting more weight on her injured leg, and after several weeks she was walking normally again. It was time for Dr. Smith to find her a forever home with somebody in Los Angeles. Hen Harbor called upon Alice, a kind friend and fellow chicken rescuer who lived nearby—she was confident that Alice would provide Judy with a loving home.

Alice was more than happy to adopt Judy---for she would make a perfect companion for Lieutenant Dan, a one-eyed, one-footed ex-cockfighting rooster.


Alice adopted Lieutenant Dan from her local animal shelter. What a perfect match it was! Lieutenant Dan and Judy quickly bonded, and one of the first activities they did together was enjoy a good dustbathing session. 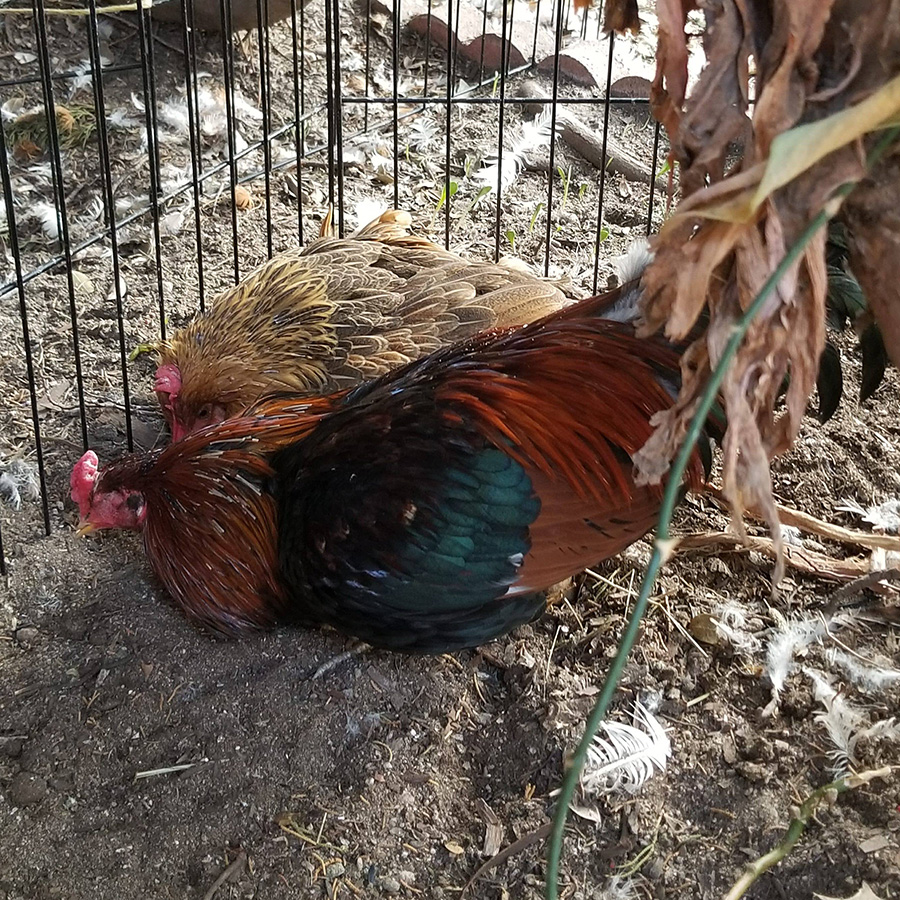 Lieutenant Dan and Judy cuddling while dustbathing
Judy is the most stoic and even-tempered birds in the flock. It's as if all the drama and trauma of her recent past have bestowed her with a sense of inner calm and peace. She is one of the nicest, happiest hens Alice has ever seen.

Hen Harbor (HH) is a non-profit, 501(c)(3) organization founded in 2012 near Santa Cruz, California. HH's mission is to provide a safe haven for chickens that are unwanted, deformed, rescued from industrial agriculture and other miserable circumstances, allowing them the opportunity to live out their lives in a more natural, safe environment. HH's long-term goal is to help shift society’s perception of chickens and other poultry away from thinking of them solely for their ‘production value’, to recognizing them for who they actually are---intelligent, emotional beings who deserve to receive proper veterinary care and the opportunity to live free of cruelty and neglect.

HH strives to ensure that each and every bird under their care is given the opportunity to be treated for their illness or injury---thus requiring veterinary care, which is HH's greatest expense. Because the vast majority of laying hens suffer from reproductive problems (the result of the artificial manipulation of their reproductive hormones, through years of selective breeding for ‘increased egg productivity’), as you can imagine, costs add up fast. Please consider donating money to HH, to help them continue to make the world a better place for the rescued birds----a world free of pain and fear, and instead overtaken by love and compassion.