Ani (Hen Stefani) is four-year-old silkie hen, who lives inside as a house chicken with favorite human caretaker, Ashley. Ashley got Ani when she was just a small chick, and Ani has since inspired her to become vegan. She has also captured the hearts and souls of millions of like-minded chicken loving enthusiasts through her popular Instagram account, Hen Stefani.

Ani starring in her second music video! ???? I tried using Sebastian but he was like, nope! . . . . . Idea inspired by @ilovechookens

Ani lives outside during the day and sleeps inside the house with her chicken friend Pablo and a baby chick she raised named Egg. When Ani first started laying, she initially had some trouble with irregular egg laying. After that, for several years she laid normal eggs without any issues. Then, all of a sudden, one day Ashley noticed that Ani was spending more time in her nest box than usual throughout the day. At the end of the day, Ashley checked the nest box to see whether Ani had eventually laid an egg, but it was empty.

The next day there was no egg either. Ashley became worried that Ani might be egg bound. So she drew her a warm Epsom salt bath to try to help Ani relax, with hopes that it might allow her to pass the egg stuck inside of her. Still no egg passed. Ashley gently palpated Ani’s abdomen to see if she could feel an egg. But she didn’t just feel one egg, she felt multiple eggs---which weren’t all intact either. The second egg felt slightly crunchy.

The next morning, Ashley called and scheduled an appointment for Ani to see her veterinarian, Dr. Suzanne Higgins at Deer Creek Animal Hospital later that afternoon. 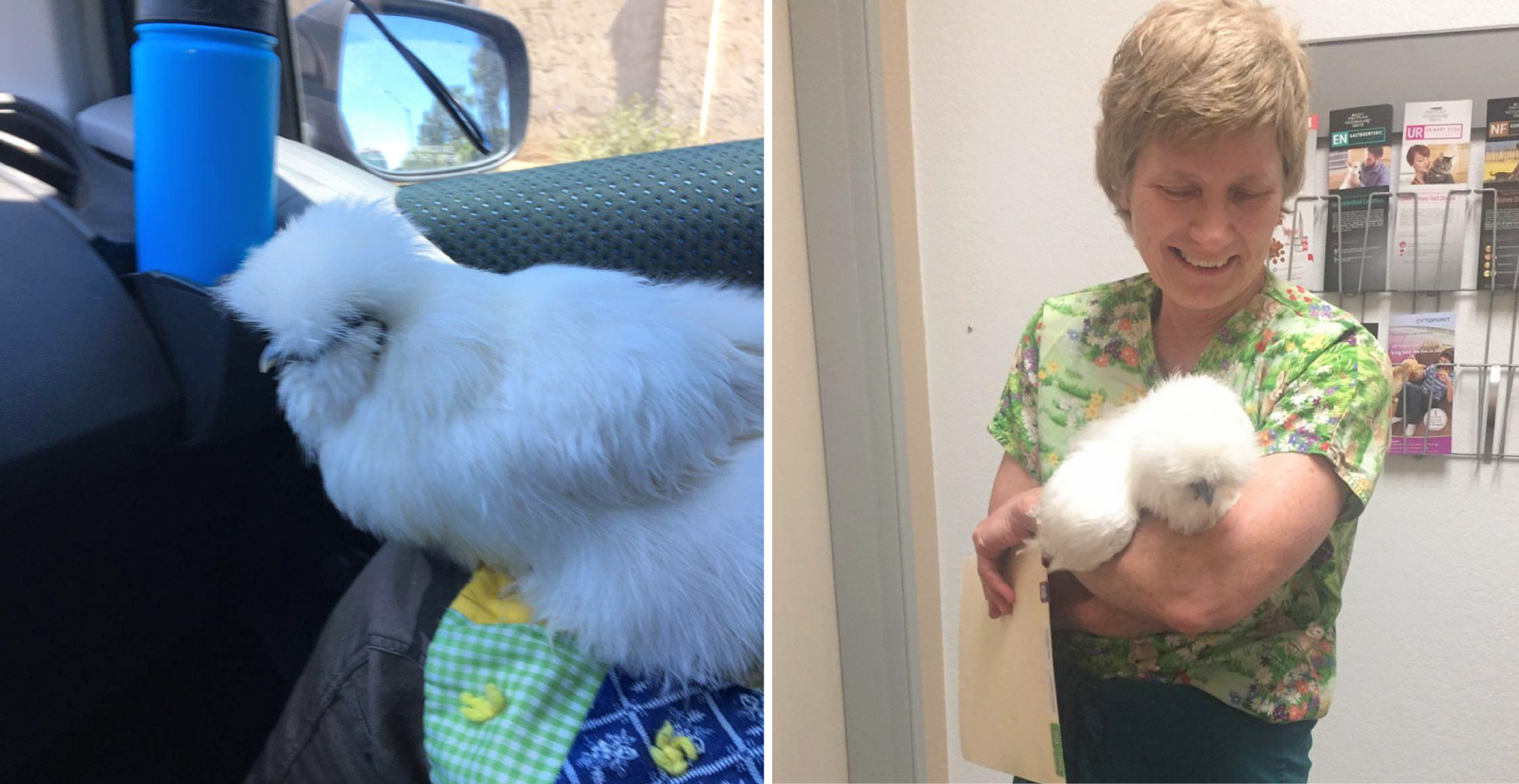 Ani riding in the passenger seat on her way to the vet (Left Photo); Ani with Dr. Higgins (Right photo).

Upon arrival, Dr. Higgins gave Ani a physical examination. She palpated the hen’s abdomen and confirmed Ashley’s suspicion. There were at least two eggs stuck inside Ani, and one of them was broken.

Since at least one of the eggs was visible through Ani’s vent, Dr. Higgins initially tried to retrieve them without anesthesia through a non-surgical approach called an ovocentesis. An ovocentesis is a procedure in which a large-gauge needle is inserted into the egg visible through the vent with the purpose of aspirating the egg contents so that it can collapse and be removed. Dr. Higgins quickly realized that it was going to be too much stress on the hen while conscious, so she recommended trying it again with Ani under anesthesia. Since there is always a risk when a bird is put under anesthesia, Ashley was tentative but agreed to the procedure.

Several hours later, Ashley returned to the veterinary clinic to pick up Ani after she awoke from the procedure. Unfortunately, Dr. Higgins was unable to remove the eggs stuck inside Ani. But since Dr. Higgins was able to successfully collapse the intact egg, there was a chance that Ani might pass the remains of it on her own.

Ani was prescribed an anti-inflammatory (Meloxicam) and discharged from the clinic. She was advised to monitor Ani closely for the next two weeks, to observe whether she could pass the eggs on her own.

Over the next two weeks, Ashley kept an eye on Ani, but she never passed the collapsed eggs. Instead, Ani laid four abnormally small eggs. Ashley brought Ani back for a follow up visit with Dr. Higgins.

One of the abnormally small eggs laid by Ani, situated next to a normal-sized egg on the left and a U.S. penny on the right, for comparative purposes (Left Photo). Ani in her nestbox, not feeling quite herself (Right Photo).

Dr. Higgins palpated Ani’s abdomen and could still feel the two broken eggs stuck inside the hen. Since Ani was still otherwise in good overall health (eating, drinking, passing feces, and behaviorally acting normal), Dr. Higgins recommended that the hen was a good candidate for surgery.

Dr. Higgins referred Ashley to Dr. Hillary Frank, a Board-certified Avian Specialist at North Central Animal Hospital, to perform the surgery. Ashley made an appointment to visit the new vet clinic later that week. After meeting Dr. Frank and the clinic staff, Ani’s surgery was scheduled for the following Saturday.

Ani being greeted by one of the kind veterinary technicians (left photo); Ani at her examination with Dr. Frank (right photo).

Dr. Frank performed a celomic exploratory surgery on Ani while under general anesthesia. Ani had multiple broken egg shells and yolk debris that were found free in her body cavity, and adhesions to the mesenteric tissues. Ani’s oviduct wasn’t functioning properly, and had become impacted with multiple eggs of varying shapes and sizes. Dr. Frank removed all the eggs and yolk debris, in addition to some abnormal inflamed tissues.

After the surgery, Ani had an uneventful recovery from the anesthesia. She was discharged from the clinic with a prescription of anti-inflammatories (Meloxicam) and antibiotics (Clavamox) to be given orally at home. Ani spent the next two weeks in the ‘Henspital, where she received first-class attention and care.

Although the surgery successfully saved Ani’s life, it did not fix the underlying issue which caused the oviduct obstruction in the first place. As Dr. Frank described it, "all domesticated chickens have been bred to lay far more eggs than their bodies can handle. They basically need to be fed rocket fuel just to keep up."

This meant that as long as Ani kept laying eggs, it was just a matter of time until her oviduct became obstructed again. In order to prolong Ani’s life span, something had to be done to stop her body from producing more eggs.

The long-term plan was to start Ani on hormone (Suprelorin) implants, which is one of the most effective, widely-used methods to stop hens from laying eggs. However, since the implants were on backorder, Ashley had to come up with a short term solution.

When hens become broody (meaning, they have a strong desire to hatch eggs), they stop laying eggs. So about a month after the surgery when Ani became broody, Ashley knew that the longer she could keep the hen that way, the better. Ani was given an egg to hatch. Three weeks later, Ani officially became a mom to a serama chick named ‘Egg’, short for Egg Ryan. 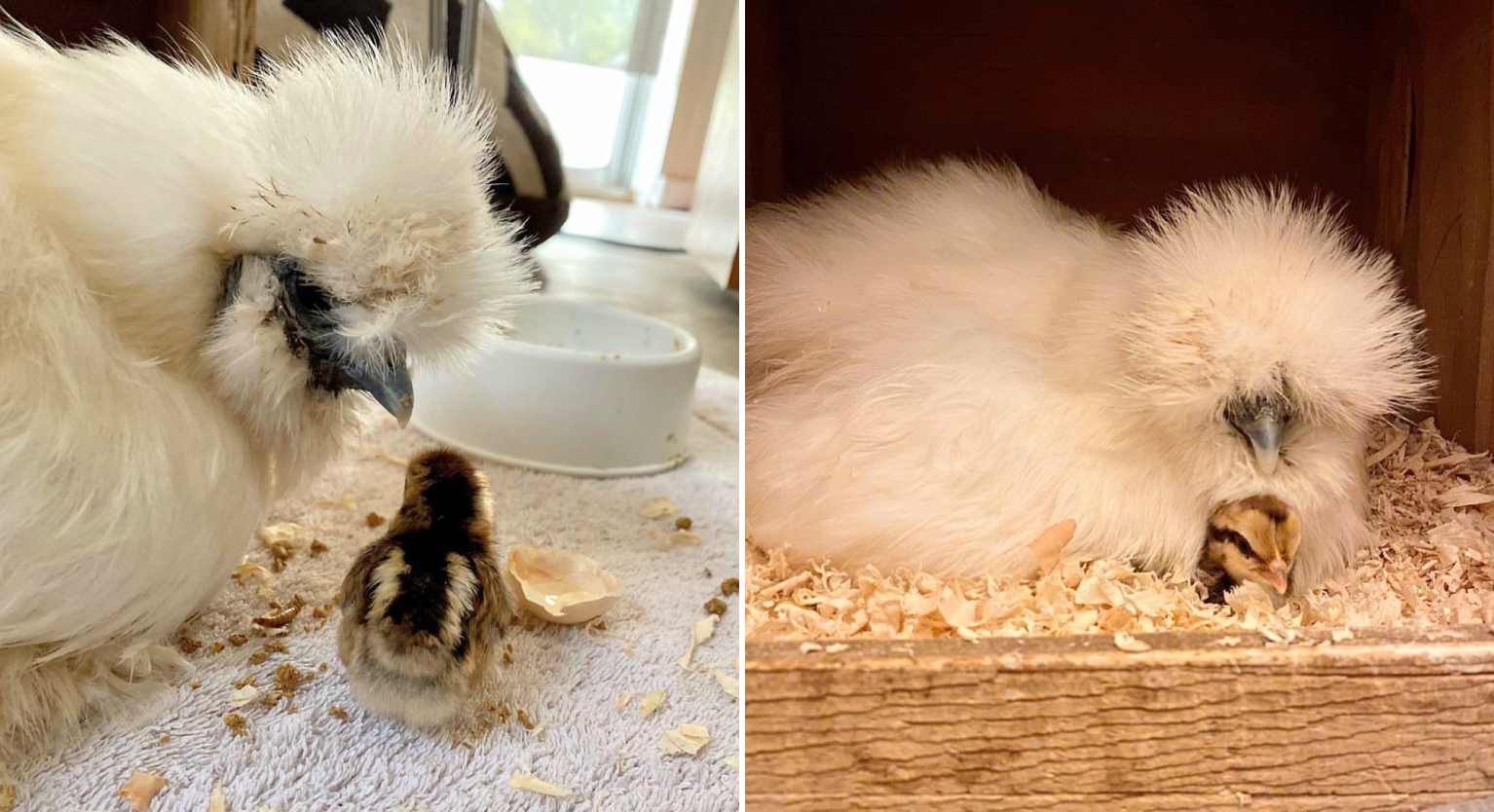 Ani and her chick named ‘Egg’.

Raising ‘Egg’ helped stop Ani from laying eggs for several more weeks, however the egg laying eventually started back up. The first three eggs Ani laid were miniature-sized. Since the Suprelorin implants are no longer on backorder, Ashley plans to proceed with giving Ani the hormone implants. However, they are quite expensive. If you would like to help contribute towards Ani’s future medical care, and help Ashley prolong her life, you can make donations here.

Fluffy Top Sanctuary is home of Hen Stefani and her fluffy friends. Follow them on social media: