Felicity is a one-year-old Salmon Blue bantam Orpington hen. She lives with three other hens—Daphne, Nancy and Ivy. This adorable little flock live as urban chickens in the United Kingdom with their humans, Sarah and her husband. All of the hens get along well and, however Felicity’s closest friend is Ivy, a lavender Frizzle Pekin hen. Ivy and Felicity are the newest members of the flock. Sarah brought them both home with her at the first Chicken Keepers Consortium event held on the 20th August 2016.

Mid-July, Felicity was happily playing with the chicken football in the garden one morning when Sarah noticed that she was doing it with one of her eyes closed, which was unusual. Sarah immediately brought her inside to have a closer look. Upon closer inspection, she saw that the eye she was reluctant to open was slightly swollen. Sarah called her local Veterinary Clinic and scheduled an emergency appointment for Felicity. Ivy came along for moral support.

Ivy providing moral support to Felicity at her vet appointment (left photo) and Felicity back home recovering (right photo)
Felicity was sent home with a course of antibiotic drops (Isathal) for a seemingly minor eye infection. The antibiotic was in oral form and Sarah administered the medication as instructed over the next 4 days by squirting it onto grapes, however it got progressively more difficult because the medication had a nasty flavour. By the second day, it looked like the swelling had gone down slightly, however there was increased discharge. Felicity was also using her eye less and less. After the weekend, it had gotten much worse. The swelling had increased, her appetite reduced, and she appeared very sad and depressed. Sarah could tell that Felicity was in an incredible amount of pain and scheduled an emergency vet visit for her that same morning.

Felicity’s eye changes over a 5 day period
Sarah and Felicity returned from the vet with stronger oral antibiotics (a change from the antibiotic drops), and anti-inflammatory medication (Meloxiaid) to help with the pain. After receiving her first dose of the anti-inflammatories (in juice form). A couple of hours later, Felicity was standing up a bit taller, more active, and even trying to use her eye---they appeared to be helping take away some of the pain. 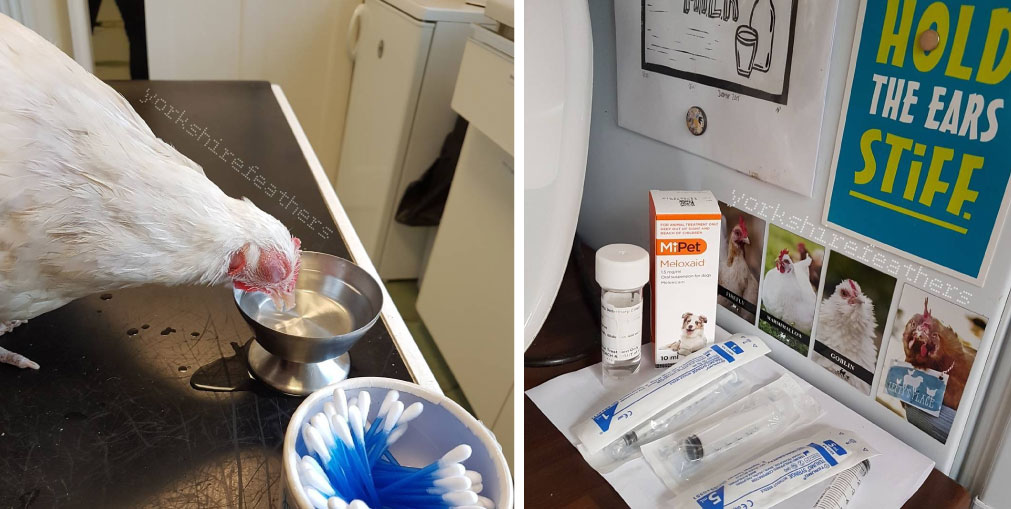 Sarah kept Felicity beside her at all times, so she could closely monitor whether she was eating, for she still wasn’t eating very much. Sarah initially fed Felicity her medication by hiding it in grapes (a favorite treat), which she would willingly eat. However, by the second day Felicity stopped eating the grapes. So Sarah tried diluting the antibiotics into smaller portions and mixing it with mash and porridge (what Felicity normally loved). No luck. Sarah tried giving her it with a small portion of bread. No luck. The only thing that seemed to work was giving it to her in a full dish of corn mix.

Sarah called her veterinarian and asked whether she could give her the antibiotics neat---without diluting it, which they said was fine as long as Felicity drank plenty of water afterwards. So off Sarah went to the local vegetable shop and brought home an assortment of different fruits that she could inject the antibiotics into---blueberries, strawberries, and melon. The strawberries didn’t work so well, but the blueberries worked perfectly. She “cut them in half, squidged out the juice on a paper towel then popped a bit of the antibiotics in the flesh”.

By the next day, the swelling in Felicity’s eye had gone down, and she ate her meds without any issues. Two days later her eye suddenly became worse---it looked even more painful and cloudy. 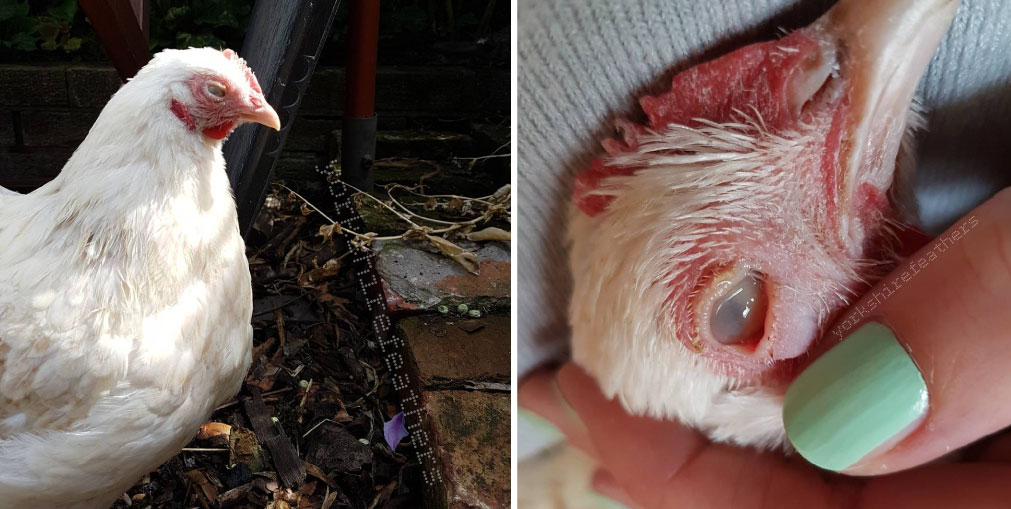 Felicity’s eye before her emergency appointment
Sarah scheduled an emergency vet appointment for Felicity to see an avian specialist over 45 minute’s drive away. After examining Felicity’s infected eye, he discovered that she had developed secondary glaucoma and that the damage to her eye was extremely severe. This meant that she would never regain her eyesight in the infected eye.

Their vet proposed the option of trying Felicity on even stronger meds to see if there might be an improvement. However, Felicity was in an incredible amount of pain, and since the eye was already damaged, they both agreed that surgery to remove her eye was the best option moving forward. The operation was an extremely tricky one for two reasons—the risk associated with going under general anesthesia (birds react differently than mammals to the anesthesia), and the complications related to their eyes. Since their eyes are disc shaped (not orbs), they must be collapsed before they can be removed. Felicity stayed overnight at the veterinary hospital that evening, and the doctor performed the surgery to remove her eye while under general anesthesia the following morning.

Felicity before her surgery
Felicity’s surgery went smoothly and she woke up without any complications from the anesthesia. She was discharged from the veterinary hospital the same day and both Sarah and her husband drove to collect her. Once back at home, Sarah set up a ‘henspital’ area for Felicity to stay during her recovery from her operation. She had several visitors---Daphne and Ivy, who came to say hello and to help her eat her treats.

Felicity’s sutures the day of surgery (left photo) and in the ‘henspital’ with her visitor, Ivy (right photo)
Sarah closely monitored Felicity the entire time, and gave her anti-inflammatory medication to help with the pain. Felicity also received daily wound baths with iodine solution over her sutures. All of a sudden, about a day after returning home, Felicity started to look incredibly uncomfortable and started panting. Sarah sat up with her most of the night, until she finally perked up again later the next day.

Over the course of the next several days, Felicity’s eye begin to “slowly fluff up”. By mid-August she had developed “a bit of a weepy spot” on her scar. Sarah called the vet and made an appointment for him to check on Felicity’s eye. Sarah and Felicity were sent home with a 7 day course of antibiotics, this time administered via intramuscular injection.

Felicity at her vet appointment (left photo) and new medication (right photo)
7 days later, Felicity’s ‘non-eye’ looked much better. However, it was still weeping a clear fluid. Sarah made an appointment with their vet to examine Felicity’s ‘non-eye’. He thought that it had healed nicely, and recommended stopping the medication. He expressed how he was certain he had removed all of the tear duct during her surgery but could investigate under anesthetic if it continued for much longer. Sarah closely monitored it over the next week.

Another week went by and Felicity’s ‘non-eye’ was still sporadically weeping or ‘tearing’, due to the presence of a small hole. Sarah brought Felicity back to the vet. He was concerned that the presence of the fluid might cause ulceration and increase the risk of a new infection----which would be a high risk for Felicity being that there was nothing left to be removed. To help mitigate the risk, Felicity had another small operation performed during her appointment, for the doctor to close up the small hole (with sutures) which had not healed like it should. Felicity was back in the ‘henspital’ for another week to recover.

Felicity’s weepy eye (left photo) and post-surgical recovery in the ‘henspital’ (right photo)
After a week in the ‘henspital’, Felicity was brought back to the vet to assess how the site of her sutures was healing, which looked great! However, since the wound was so small and the skin so silicate, the vet wanted to keep the sutures in for another week before they are removed.

Behavior-wise, Felicity has since been well and back to her old self. She adjusted incredibly fast to not having her right eye---for she was accurate with her pecking skills and movements. The only difference Sarah noticed is that Felicity runs in a diagonal line, not a straight line when she is running really fast.


About the Chicken Keepers Consortium