It was a Saturday morning in mid-October when Elsa and her sisters---Miranda, Lara, and Louise, were rescued from slaughter. For the past one and half years, Elsa laid eggs for a commercial egg laying farm. Willem and Liane Morsink have been doing rescues like this since they first formed their microsanctuary, Ex Legkipjes NL in 2011. The sanctuary is located north of the Netherlands, in a small farmhouse with a piece of land where they house rescued animals, with a focus on ex-battery hens.

When Willem and Liane Morsink first laid eyes on Elsa, they saw a very skinny, dehydrated, and starving little hen. She was also shivering as she had almost no feathers covering her frail little body to help keep her warm. The hen was also very skittish and scared of people.

Elsa and her sisters in the crate, on their way to safety

Even though it was a weekend, on the drive back, Willem and Liane stopped by their veterinary clinic, Dierenkliniek Makatsi. They had already spoken to their veterinarian, Dr. Shirley Hendriks about their rescue ahead of time, so she was ready and prepared for the hens upon their arrive.

From previous rescues, Willem and Liane found that most of the ex-battery hens rescued had reproductive issues. This is because the modern day egg laying hen has been selectively bred to lay an excessive amount of eggs (over 300 eggs a year). In anticipation of these reproductive issues, Willem and Liane are diligent about ensuring each hen received an initial veterinary exam with Dr. Hendriks to assess their overall health status.

Upon arrival at the vet clinic, Willem and Liane opened the crate to determine which hen would be examined first. There was a puddle of blood on the floor of the crate. One of the hens was bleeding from the vent, which had prolapsed. This hen was Elsa, who was immediately rushed inside the clinic to Dr. Hendriks.

Elsa getting examined by Dr. Hendriks

Dr. Hendriks thoroughly cleaned and irrigated the exposed tissue and gently pushed it back inside the hen's body and sutured shut.

Elsa getting cleaned up

To help prevent future egg laying and reduce the risk of the prolapse from reoccurring, Elsa received a deslorelin (Suprelorin®) implant.

After Elsa was discharged from the veterinary clinic, she was taken back with Willem and Liane to see her new home. Elsa and her sisters were temporarily placed in a recovery area set up inside the kitchen. Each hen had their own large rabbit cage, filled with hemp bedding, hay, fresh water dish and feed. At night, Elsa and Louise (one of the other rescued hens who wasn’t feeling well) were given a heat lamp. Since Louise was sick and Elsa barely had any feathers, they both needed supplemental warmth. 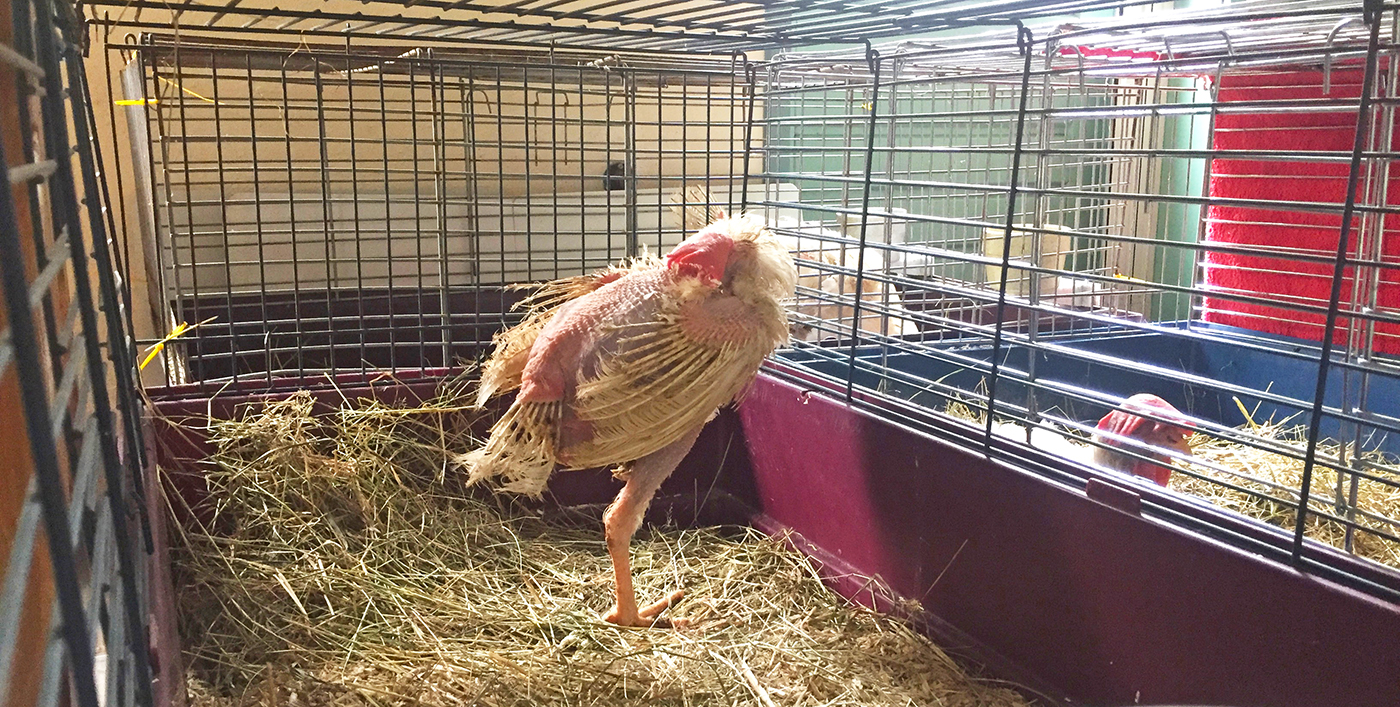 Since the hens had lived in a tiny cage at the egg farm for 1.5 years, they were not use to using their legs. Therefore, they had to be gradually introduced to a larger area.

With the cooler winter weather approaching and Elsa having limited feather coverage, she was given a fleece sweater to wear for added warmth.

Elsa in her adorable fleece sweater.

During their daily foraging sessions, the hens were introduced to Casper, a rescue rooster who had been dumped. Casper lived outdoors in the run surrounding the greenhouse. This allowed the birds to gradually get to know each other without any physical interaction. 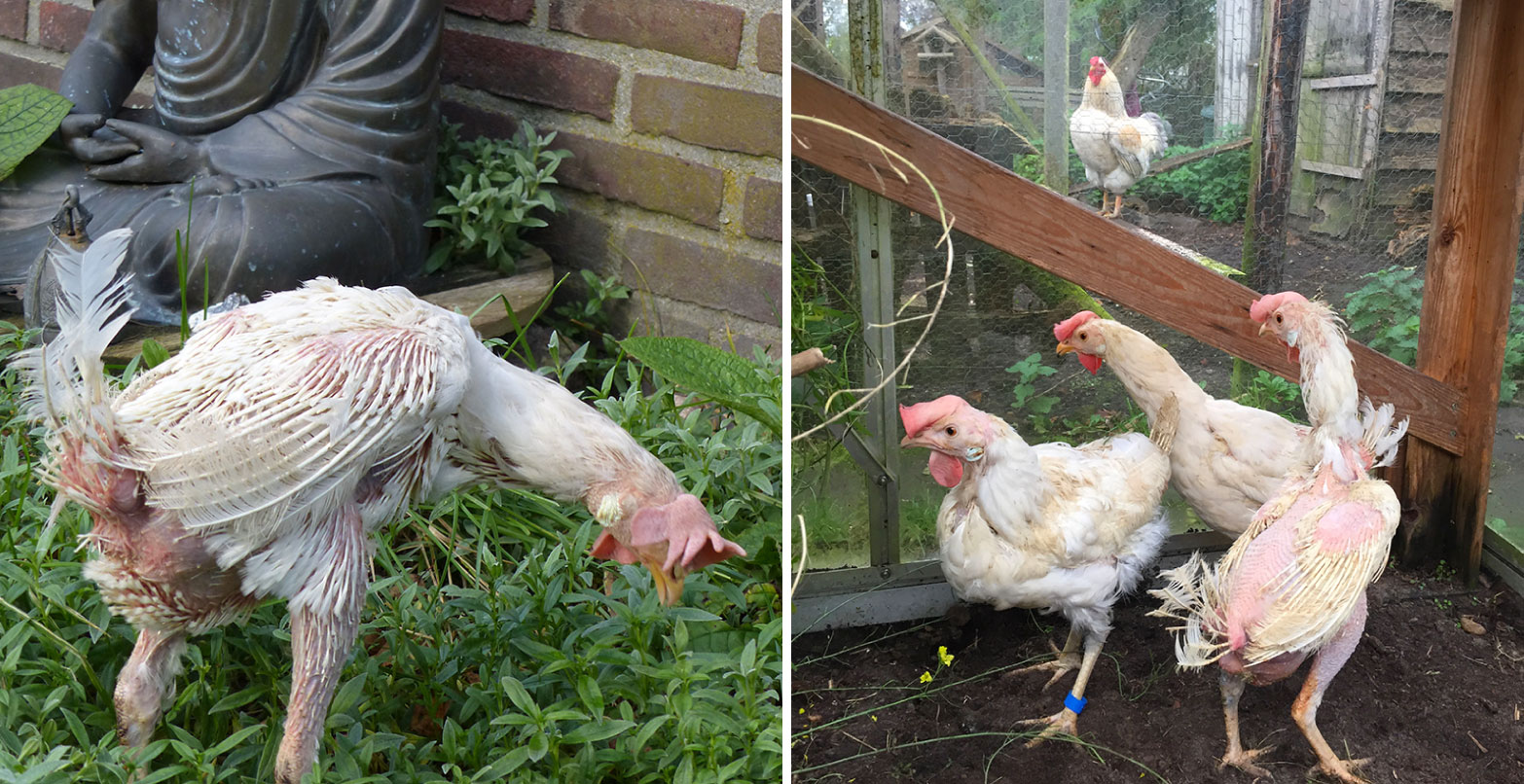 By the start of week four, the hens were relocated outside to live with Casper in the chicken run full-time. The transition went smoothly and there was no surprises or issues. Like most roosters, Casper enjoyed looking after his hens. He tells them where to go for the best tid bits, signs a song every morning, watches over them consistently, and an excellent mediator during any conflicts.

At night Elsa and the other birds sleep inside their predator-protected coop. Although the coop had perches, it took the hens a few days to realize how to use them since they weren't given a perch while living in the tiny cage at the egg farm. 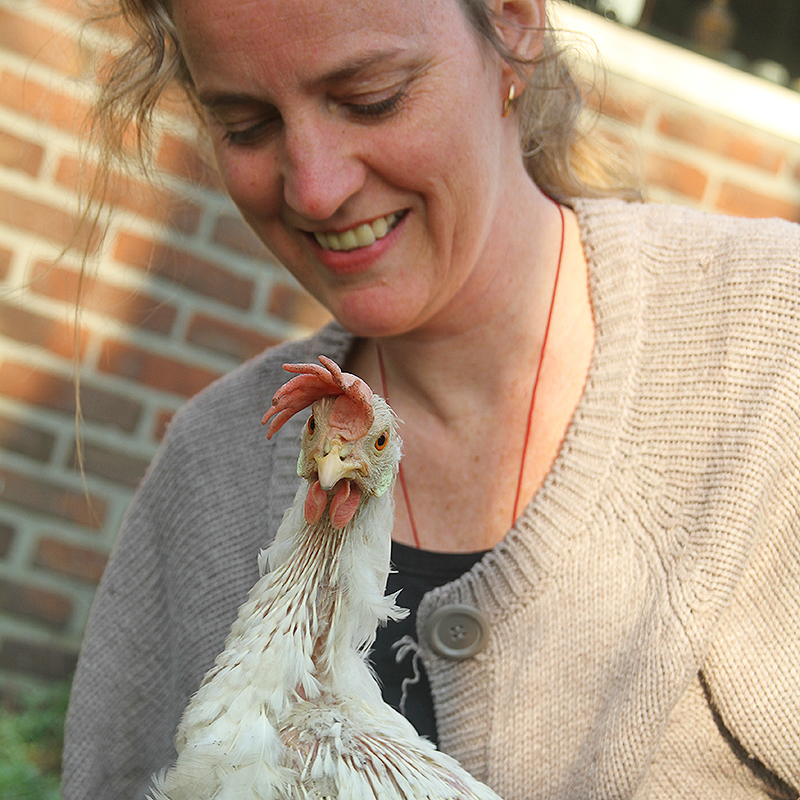 Liane: “We really enjoyed having them and caring for them, but we noticed the hens didn’t get very old: after one year the first two already passed away. This was all very sad and upsetting. First we thought this was due to breeding and a rough start of their lives and that there was simply nothing that could be done about it. But then we got to know more and more fellow chicken rescuers in, many of them in other countries where people had been rescuing ex-battery hens for a much longer time. We learned a lot about their health care and especially about the impact that reproductive health problems pose in these girls. Around that time we also met our current vet and we started using Suprelorin implants for egg related issues. We also learned to recognize a lot of the health issues before they became serious and untreatable. In 2014 not a lot of people in the Netherlands were using implants in hens and we learned a lot from our international friends. Nowadays our hens live healthier and longer lives. Many of them – because they are mainly rescues from the egg industry – now have implants. Almost all of the ex-layers developed egg issues at some point: either infected oviducts, soft shelled eggs, repeated lashes etc.” - Liane

Dierenkliniek Makatsi is a veterinary clinic located in Nieuw-Amsterdam, Netherlands. Dr. Shirley Hendriks, DVM MRCVS first opened the practice in 2002. The clinic treats a wide range of small animals, anything from dogs, cats and yes, of course chickens!