Belina is a 3-year-old ex-battery hen who first presented to us for a routine health check while her companion Dora was under treatment for an oviduct infection. The oviduct (the birds uterus) is a sausage like structure which ‘catches’ an ovulated follicle and yolk from the ovary, and miraculously in about 24 hours adds white, membranes and a shell to build a fully formed calcified egg!

In laying hens this structure works incredibly hard; in effect giving birth every 24 hours and as such can be prone to damage and subsequent infection. In Belina’s case, despite being an apparent picture of health, a firm, swollen oviduct was picked up at her health check. She hadn’t laid for a while and in such cases the concern is that the oviduct may have become obstructed with subsequent yolks and partially formed eggs building up behind.

If left unchecked, yolks can actually start to spill out into the body cavity leading to a potentially life threatening abdominal infection known as peritonitis.

The priority was to try and stop further ovulation which in many cases we achieve with the aid of a slow release hormone implant injected under the skin over the breast muscle. In most cases this together with antibiotics, anti-inflammatories and careful feeding will stop the progression of the condition. As such the initial plan was to implant Belina as a preventative measure.

Unfortunately despite this treatment, the mass continued to grow at an alarming rate and she began to show signs of illness, sitting quietly away from the rest of the birds and passing watery droppings containing undigested food. She was hospitalized for close observation and despite supportive care she continued to lose weight, and appeared to be drinking much more than normal.

We were concerned that the mass now either involved the intestinal tract, liver or kidneys resulting in the above symptoms. A blood sample was taken to assess her organ function which although showed she was now becoming anaemic; liver and kidney parameters were still all within normal limits. Despite putting on a brave face her quality of life was starting to deteriorate with her comb losing its colour, continued weight loss and her breathing now becoming laboured.

She was obviously not responding to medical treatment so the decision was made to further investigate the mass via endoscopy, with the owners now prepared for the worst.

Once asleep she was attached to a mechanical ventilator that would breathe for her throughout the anaesthetic and an intravenous line placed to provide fluids, antibiotics and pain relief.

It soon became apparent there was actually no room to insert the endoscope as the mass was now filling the entire body cavity! As such the only option was to surgically explore the abdomen to identify and hopefully remove the mass.

A two and a half hour surgery ensued, confirming the mass as a grapefruit sized, pus filled oviduct and then removing it by carefully dissecting it away from the surrounding organs. 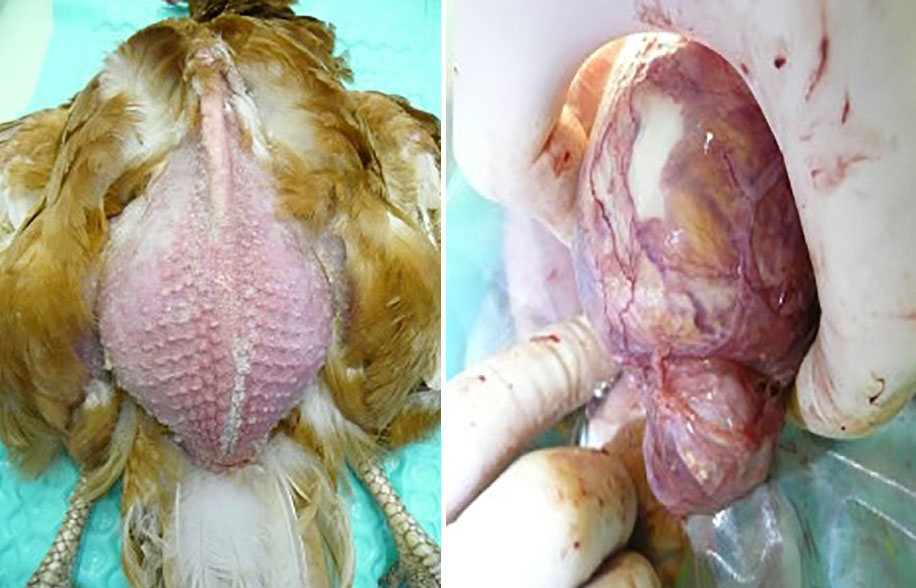 Belina's abdomen before and during removal of the mass in her surgery.
Specially designed metal clips were used to clamp off the many major blood vessels. With the mass finally removed we could clearly see why she had been unable to properly digest her food. The gizzard (which is the muscular part of the stomach, responsible for grinding up the food and essentially operates as the bird’s teeth) had been compressed to such an extent that food was not even entering, but running straight over it, into the intestines and being passed out undigested. 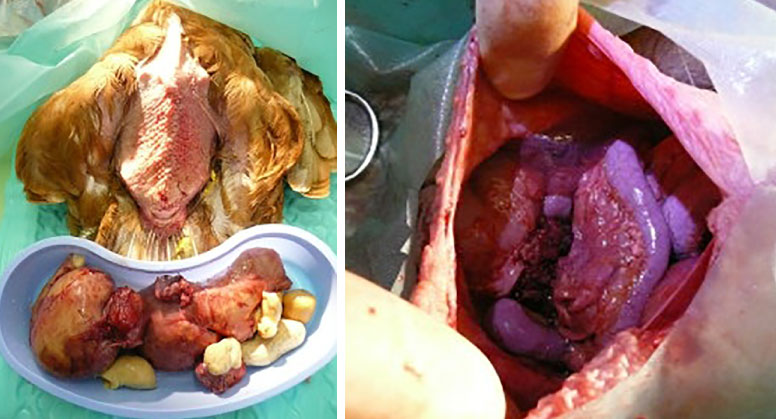 Belina's abdomen during and after surgery.
Despite losing over 500g which was a ¼ of her body weight during the op she made a remarkable recovery, to the point we saw her for her final check to remove stitches and she had already put the weight back on. The owners were delighted and inform us that she is now feeling better than ever and already regained her position at the very top of the pecking order!

Three and a half years after her dramatic ‘hysterectomy’ op, Belina (and her friends) visited us for their annual health check.

Belina and her pals visiting for their health check.
We were pleased to report that at 6 years old, she looked fantastic and most certainly still the top of the pecking order--with no signs of slowing down!!

Avian Veterinary Services, located in Northwich, Cheshire, offers state-of-the-art medical and surgical facilities dedicated exclusively for the treatment and care of birds. The practice caters to a wide variety of bird species---from parrots, raptors (falcons, owls, vultures, hawks, and eagles), chickens, pigeons, and waterfowl. The practice is fully committed to providing their patients with the very best in avian healthcare, and personally provides a 24-hour emergency service for all of their clients.