Alfalfa is a 7-year-old Ameracauna rooster living in the Santa Cruz mountains who is a survivor from the wildfires that occurred in California last year. He and his flock were left to fend for themselves during the mandatory evacuations. During this time, Alfalfa sustained what his owner believed was a seemingly minor wound on his left leg.

Over the course of several months following the fire, Alfalfa’s owner noticed that Alfalfa walked with a slight limp. They initially attributed it to arthritis, since he was an older rooster. However, his lameness slowly worsened to the point where he could no longer walk or stand. Because Alfalfa’s owner was recovering from several months of hospitalization, she relinquished the bird to Hen Harbor. Hen Harbor quickly recognized that Alfalfa needed prompt veterinary care, and took him to see their veterinarian, Dr. Hilary Stern at the Exotic Pet Clinic of Santa Cruz.

Alfalfa when he first arrived at Hen Harbor

During the examination, Dr. Stern noticed a small puncture-type wound near Alfalfa’s left knee. The wound was adjacent to a large subcutaneous mass which she suspected was hardened pus, presumably from the puncture wound. The knee did not extend fully due to the mass.

To gain a better understanding of the extent of the infection in Alfalfa’s leg and whether there was any bone involvement, Dr. Stern took two radiographs. You can see in the radiographs that Alfalfa’s left leg could not be straightened. Luckily the bones looked unaffected. Dr. Stern advised proceeding with surgery so she could properly debride the infected tissue underneath Alfalfa’s puncture wound. 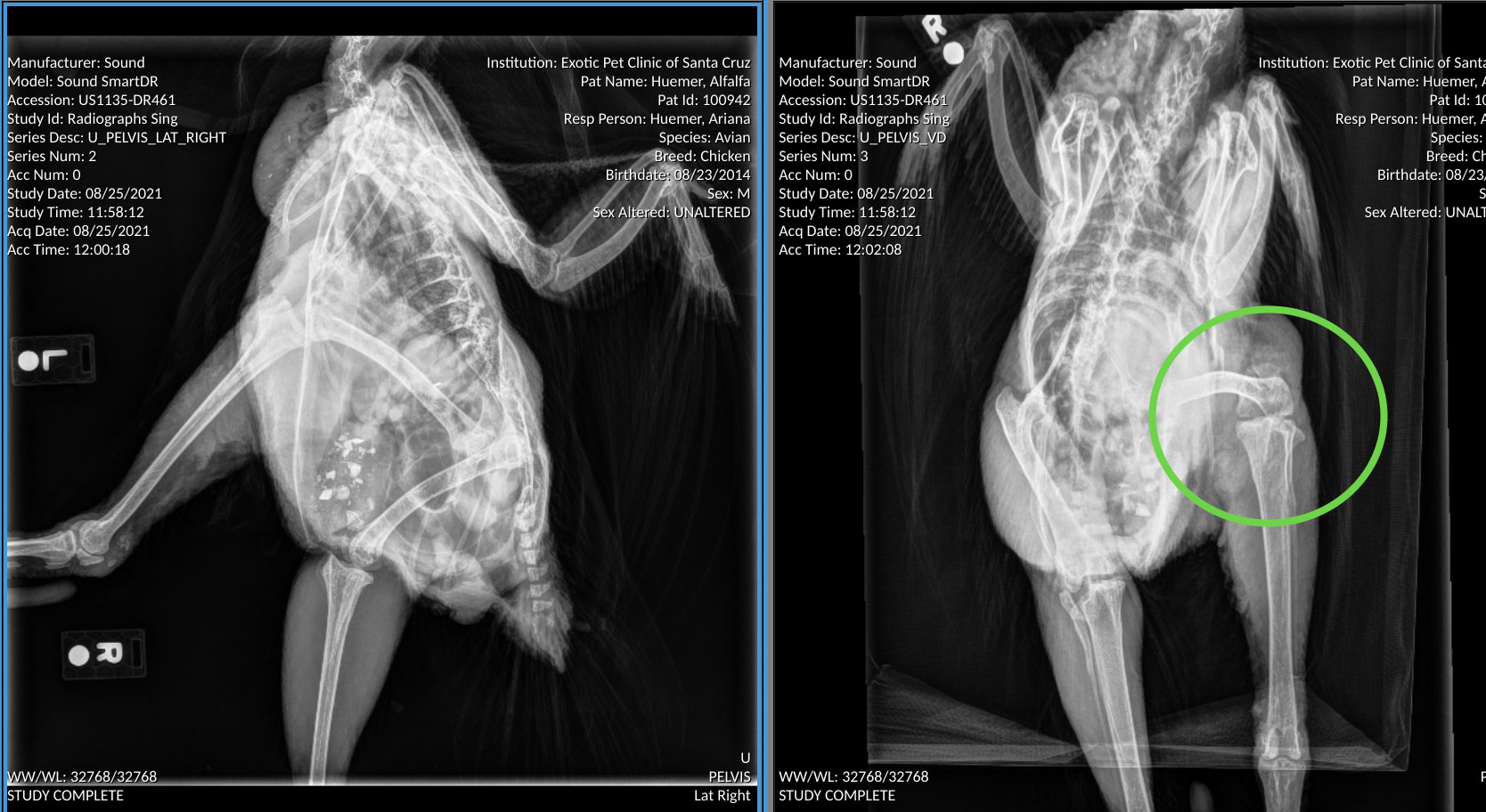 Radiographs of Alfalfa’s injured leg
The next day, Hen Harbor brought Alfalfa back to the veterinary clinic for surgery. During the procedure, Dr. Stern quickly realized that Alfalfa’s wound was more extensive than she initially t thought. It ran almost the entire length of Alfalfa’s tibiotarsus (shin bone), with a large, egg-sized ball of solid pus at one end. Dr. Stern also came across a second small puncture wound 4 inches below the first, from which pus from the first puncture wound was draining.

Due to the size of the incision needed to clean out the wound, Dr. Stern decided to put Alfalfa under general anesthesia. He was intubated, and a technician did intermittent positive pressure ventilation to make sure he was oxygenating well. Although placing a drain is not commonly done in birds due to their caseous (thick and dry) pus, Dr. Stern inserted one into his leg because some of the pus was fluid.

Alfalfa had an uneventful recovery waking from the surgery. He was discharged from the hospital a couple hours later, and sent home with Hen Harbor along with instructions for post-surgical care of the surgery site, antibiotics, and pain medication.

Upon arrival back at Hen Harbor, Alfalfa was placed in a recovery ward inside the house so he could be closely monitored and comfortable while he recovers from the surgery. His wound is flushed twice a day with warm, dilute betadine solution to help expedite his recovery and keep the area clean.

Alfalfa's Post Surgical Wound (left photo) and Alfalfa's Recovering (right photo)
At this time, Alfalfa is still slowly recovering from the surgery. He remains on antibiotics and pain medications as he recuperates in comfort in his special recovery ward. Says Hen Harbor’s director Ariana Huemer, “He eats, drinks, and enjoys watching YouTube videos in the recovery ward. He’s a great little patient and puts up with a lot!”.

“This is an instructive case for pet owners”, said Dr. Stern. “Small puncture wounds can mask a large amount of underlying tissue damage. If your chicken is injured bring it to a veterinarian promptly so that problems such as Alfalfa has can be avoided”.

If you would like to help contribute towards Alfalfa's care, please click here, or via Venmo (henharbor), or PayPal (henharbor@gmail.com).

Hen Harbor (HH) is a non-profit, 501(c)(3) organization founded in 2012 near Santa Cruz, California. HH's mission is to provide a safe haven for chickens that are unwanted, deformed, rescued from industrial agriculture and other miserable circumstances, allowing them the opportunity to live out their lives in a more natural, safe environment. HH's long-term goal is to help shift society’s perception of chickens and other poultry away from thinking of them solely for their ‘production value’, to recognizing them for who they actually are---intelligent, emotional beings who deserve to receive proper veterinary care and the opportunity to live free of cruelty and neglect. Please consider donating money to HH, to help them continue to make the world a better place for the rescued birds----a world free of pain and fear, and instead overtaken by love and compassion.

The Exotic Pet Clinic of Santa Cruz is an exotics only veterinary clinic in Scotts Valley, California. They specialize in the unique needs of chickens and ducks, other birds, rodents, reptiles, hedgehogs, ferrets, and rabbits. Their hospital is fully equipped with a pharmacy, digital x-ray unit, and in-house diagnostic laboratory for complete blood counts, chemistry panels, cytologies, and fecal analyses.

Dr. Hilary Stern is the founder and owner of the Exotic Pet Clinic of Santa Cruz, the county’s first animal hospital devoted exclusively to the care of exotic pets. Dr. Stern grew up in Massachusetts. After graduating from Yale University with a degree in history, she attended veterinary school at the University of California, Davis. During veterinary school, Dr. Stern was the president of the Avian and Exotics Club and spent her summers and externships working with birds, reptiles, small mammals, and wildlife.

Following graduation, Dr. Stern worked for a number of exotic pet practices in the Bay Area, focusing first on birds, then rabbits and small mammals, and finally reptiles. During her career, she has also worked with animal shelters, parrot and rabbit rescue groups, wildlife centers, and raptor rehabilitation facilities. She is a consulting veterinarian for The Rabbit Haven, Native Animal Rescue, and Mickaboo Companion Bird Rescue. She has created and worked at low-cost spay and neuter facilities for rabbits in Santa Cruz County, and participates in the training of veterinary students and veterinary nurses on the care of exotics pets and wildlife.

Dr. Stern is board certified in Exotic Companion Mammal Practice by the American Board of Veterinary Practitioners (ABVP). There are about 30 boarded exotic companion mammal veterinarians in the world, and Dr. Stern is one of them. She is the only veterinarian in California with this certification.

Dr. Stern’s areas of special interest include surgery, internal medicine, exotic animal dentistry, and client education. She and her family share their home with a naughty rabbit, two parrots (one naughty, one not), seven chickens, and a bearded dragon with half a tail.